Yo! Do any of you fanfic fans enjoy drawing and painting in photoshop? Would you mind helping a down on his luck fanfiction author out?

For those who wouldn't mind, I'm interested in making profile paintings for all the bios for my Harry Potter series, as well as book covers to use for my fanfics.

If you are interested, please email me at varnell.brandon@gmail.com.
Posted by Unknown at 1:01 PM No comments:

Working on a new chapter

Alright, so I'm going to start writing another chapter for Ashikabi no Shinobi, since it seems to be my second most popular story. I can't make a good estimate of when I'll finish it yet, because I have no clue how long the chapter is going to be. That being said, I started writing it yesterday and made decent progress.

And on a side note, I just saw Star Trek yesterday as well. Let me tell you, that movie was aweshume. No, I do not mean awesome, I mean aweshume. Awesome just doesn't begin to properly describe how cool that movie was.

In any case, the movie was incredible and apparently was made using just seven stage sets in LA. How cool is that?
Posted by Unknown at 5:38 AM No comments:

PriyanshPotter: I'm not sure how you can say that nothing happened here. There was at least two important events that took place in this chapter and several key pieces of information that I gave you that are important to the story, as well as some foreshadowing certain instances for the future.

Wirdo: By alternative focuses do you mean other magical foci like staffs instead of wands? Or something else? Please be a bit more specific with your question because I'm not one hundred percent positive what you are talking about?

As for your second question, there aren't really any non magical associations that know about magic. I may create a society like that, possibly, and use them as an antagonistic group for Harry to face, but that's only if I can reasonably put it in without losing focus of the story.

However, while I don't know if I'm going to have magically knowledgeable muggles, I will have muggles who know about Vampires. The Vatican, for example, know of the existence of vampires and werewolves and hunt them down where ever they can.

narutoDkurosaki: I'm not sure you know what a Gary-stu is if you think Harry is one. A Gary-stu is a male character that is nauseatingly perfect. Nothing he ever does is wrong, he is always right, he always knows what's best, he always does the right thing, he never gets flustered or confused because he knows EVERYTHING and always has a solution to every situation he may find himself in.

Harry would not have been confused about his feelings if he were a Gary-stu either. He would have known right away what was happening and why, then he would have taken steps to ensure that it was under control.

There are a hundred other little things that Harry does that show he is not a Gary-stu; things like dressing in a muggle business suit because he thinks it makes him look more mature when all it does is make him look like a child playing banker. These small character flaws are what make him specifically not a Gary-stu.

To be frank, Gary-stu is a term people throw around far too often without truly understand what that term means.

Gary: All I'm going to tell you is too bad. Puberty is something all children go through, and as this is a story being told mostly from Harry's perspective, you will have to bear witness to him muddling his way through the most awkward years of a teenagers life. It's the unfortunate consequence of writing a story about children as they grow up.

GinaKim: In that case, I'm not sorry to see you go. It's clear to me that you have no concept of how to properly build up a series.

I also find it funny that you decided to delete this story from your favorites on the chapter that Selene made her departure from this fanfic. Really smart of you.

And thanks for upping my review count by the way. I always love you 'I can't read your story anymore' types. It's like you get your rocks off telling me your not going to read my story anymore like I should actually care. Especially when in doing so all you're doing is giving me one more review to add to my count.

Hydreigon915: Yes, they are. Both Jeanette and Therese are from Vampire: The Masquerade Bloodlines. I was wondering if someone would actually get that reference.

n0mstr: Actually, Harry's magical index is simply the largest that Emily has ever seen. I did not mention it directly, but I left enough hints that while, rare, there are people who have had a similar case of having a high magical index within the past one hundred years.

I don't think I need to tell you which two had a similar index rating to Harry.

To start, I am pleased to see that Selene has been, for the most part, well received. Creating likable, realistic (at least realistic as possible while keeping compliant within the canon story restraints) OC's is always difficult. Most of the time an OC will either be extremely annoying and unlikable, or they will be a Gary-stu or Mary-su. That you guys have come to enjoy reading about Selene means I've accomplished something monumental here, as there are very few stories with likable OCs'. In fact, I can only name one story with good OCs', and his story is OCcentric.

In other news, I completely forgot how large grapefruits were. I was actually looking for another item to reference breast size but couldn't think of one and just went with grapefruits without really realizing that they were a pretty good size. I have since corrected that small mishap when I said Lisa's chest was the size of grapefruits.

So some people have decided they apparently can no longer read my story because Harry is going through puberty. I guess they're uncomfortable reading about someone going through a natural process that happens to everyone at some point in time when they begin growing up. I don't really blame them for feeling this way, I remember when I went through puberty and it was very awkward to say the least.

I do, however, have to question the validity of their statement. I went on to these people's profiles just to see what kind of stories they have on their favorites, and most if not all of the people who said they can't read my story anymore possessed unparalleled amounts of slash. In particular, they had a lot of Harry/Snape stories.

Now, maybe it's just me, but I find the idea of reading about a child going through puberty - something that happens to all of us regardless of whether we admit it or not - to be far less controversial and disturbing than a 30 something year old man having sex with another male 20+ years his junior. Maybe it's just me and I'm the weird one, but I can't help but think these people have a serious double standard.

What? You think I forgot? Bitch please.

There were several people who managed to guess my reference. For those who didn't, it was a tribute to Daneel Rush's Naruto Genkyouien, awesome story by the way. Even if you are not necessarily a Naruto fan, I would check this one out. The funniest story I have ever read to date.

And now, the Cyber Cookies. They go out to these people:

Cheeser42, who couldn't remember the name but knew it was written by Daneel Rush. blueper, Guest. I'm a Nobody. Who are you?. Wrandral. Futon-Lord, and yes, if you divide 90,000 by 10, Dumbledore's power level is OVER 9000! narutoDkurosaki. And IReadOnly. Congratulations! You people get a Cyber Cookie! 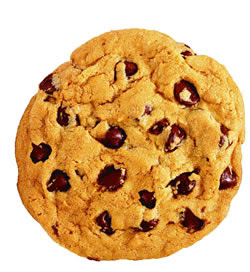 I apologize if you guys don't like chocolate chip, but that's all we have in stock right now.
Posted by Unknown at 5:21 AM 10 comments: