Right, why don't we just ignore that opening sentence and get on with it. This is just a quick update to let you all know I'm still alive, kicking, and writing fanfiction. I'm well on my way to finishing the next chapter of Harry Potter and the Heir of Slytherin; it's shaping up quite nicely if I do say so myself. I won't give any spoilers, but I will tell you that people who have been worried that my fanfic is just a rehashing of canon will most definitely stop worrying here. This is the most AU chapter I've ever written, so now you all have something to look forward to.

That being said, I unfortunately will not be getting out until next week. Reason being that I just bought myself a condo, which I believe I mentioned in my last post. I'll be moving in this weekend, so I won't have much time for writing.

Let us all make a sad face: 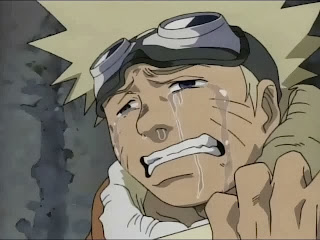 And now that we have all been thoroughly disturbed by Naruto's snot-nosed crying, let me share with you the trope of the day. Since I've so far only given tropes that you would be best off avoiding unless you're a kick ass writer or something, I thought I'd share one that is not as... blegh. It's called Fourth Wall Mail Slot and was copy and pasted directly from tvtropes.org because I am too lazy to type it all out myself.

Sometimes, characters will answer questions from readers (though sometimes the questions are only meant to seem as if they came from readers, such as in Family Guy), as if the Fourth Wall had a mail slot. This is particularly common with Webcomics, since the nature of the medium makes it easy to set up multiple pathways for audience feedback, such as a Shout Box, a blog-powered News Post, or a Message Board.

One reason that webcomickers have given for answering questions in-character is to not give as many spoilers, since then the answers are limited to what the character knows. The Fourth Wall Mail Slot is also a handy gimmick for sketching quick Filler Strips to prevent Schedule Slip, though many webcomickers keep it separate, as a bonus extra, many (such as El Goonish Shive) include it as a regular end-of-issue (or story-arc) feature. Some don't even make the in-character Q&A into a comic, leaving it as plain text instead, or with just a small illustration. Occasionally this is used to reveal All There in the Manual-type information about the storyline that hasn't been mentioned in the comic yet.

Naturally, given all these advantages, it's not surprising that webcomic artists will sometimes blatantly make up stuff to push through the slot. ...wait.

Posted by Unknown at 2:40 PM No comments: