The trope of the day is one of my favorites today, and something I think a good deal of you also like; it's called Crouching Moron, Hidden Badass. 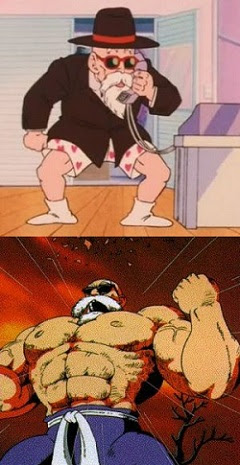 "As soon as I find my pants, I'm going to kick your ass!"


Vlad Plasmius: This can't be happening! You're an idiot! An idiot!
Jack Fenton: That may be, but I'm the idiot who beat you.
— Danny Phantom, "The Million Dollar Ghost"

At first glance, he's The Fool. She's The Ditz. And no, it's not Obfuscating Stupidity — they're really like that.


Most of the time.


If you push the right button at the right time (translation: the wrong button atany time at all), things will suddenly change. The goofy smile disappears.Their eyes start glowing. An aura of energy surrounds them. Little pieces of rock start floating up from the ground. Alternately, they may simply display a sudden leap in speed, strength, martial skill and weapon use.


After the dust settles, however, they're right back to smiling goofily, tripping over their own feet, and just generally acting like the Plucky Comic Relief — while their teammates are rubbing their eyes, and trying to figure out what just happened. Often, the character doesn't actually know himself.


Basically, the individual has access to superpowers of some sort — could be psionics, could be Functional Magic or Applied Phlebotinum, could beNanomachines — and they either don't know they have the power, or don't know how to control it. Occasionally they have a Power Limiter that they are unaware of that will seal their strength until needed.


Common triggers include a friend or loved one in danger (see Mama Bearand Papa Wolf), a Million-to-One Chance scenario, or just a "worthy cause." Sometimes, just getting 'em really, really pissed off will do the trick — although their easy-going personalities make that a rare occurrence.


The main point, however, is not the powers, but the radical change in personality that comes with them. The character may ordinarily be harmless, maybe even a Technical Pacifist (or Paper Tiger), but when in Bad Assmode, there's no mercy.
Sometimes, this can end up as a full-blown Superpowered Evil Side or Jekyll & Hyde scenario, if the Bad Assside refuses to revert. In those cases, it might turn out that the individual was once aware of his powers and abilities, but somehow 'sealed' them — consciously or otherwise — because he knew that With Great Power Comes Great Insanity.


In most other cases, the character will gradually learn to control his power — although he'll usually still need toFreak Out a bit to use his full power — and may evolve into an Idiot Hero, or more rarely, a straight-up Messiah.


In a few cases, things will go bad. The Bad Ass powers are required too often, and they gradually take their toll on a previously cheerful individual. Usually results in an Emo or, in the case of females, an Emotionless Girl. Invariably results in her friends wondering if Saving the World was really worth the price.


The Japanese term for this is "dame elite" ("dame" meaning no good).
If intentional, then it might be a case of Obfuscating Stupidity or Good Is Not Dumb, or perhaps even the Eccentric Mentor in cases where the character is recognised and respected as a badass by those who know him but who seems idiotic to those who don't. If the body count they rack up is also not intentional, then we're dealing with Mike Nelson, Destroyer of Worlds.


Will sometimes occur as a result of Giving the Sword to a Noob.
Please do not confuse this with Let's Get Dangerous, which is when a seemingly ditzy or harmless character also demonstrates fighting skill, but without the change in personality and may not involve powers.
Compare with Heroic Resolve. See also Minored In Ass Kicking, where the character acts like The Smart Guyinstead of The Fool.


Contrast Weak, but Skilled, Mistaken for Badass, and Leeroy Jenkins (which is essentially Crouching Badass Hidden Moron). The Rich Idiot with No Day Job counts on people not thinking of this trope.