Ahem... anyways, there's not much going on in my life right now. I'm living it up in my condo and trying to write out my budget. Other then that, yeah, not much.

Tomorrow, the blog will be more interesting then today. I'm actually going to do a Q&A for Devil Ninja, but for the moment, you guys will have to contend yourselves with another trope. This one is called Action Girl! 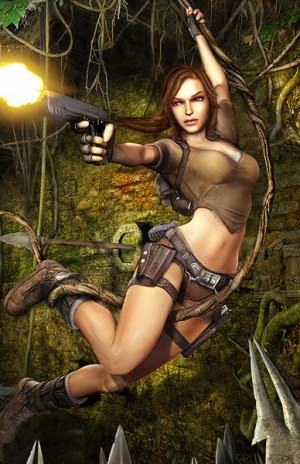 The phrase "Fight like a girl" becomes aBadass Creed.

I'm a big haymaker in a title fight.
I'm a cute black kitten with a nasty bite.
I'm an action double-feature on a Friday night!
I'm me!
— "I'm Me", Vanessa Doofenshmirtz from Phineas and Ferb

The Action Girl is a female Badass who can go toe to toe with her male counterparts without breaking a sweat. Damsel in Distress? Not for this babe. She doesn't sit around waiting to be rescued. She's headbutting her jailer and breaking herself out, if they even manage to kidnap her in the first place. She proves, with her very being, that girls aren't only not helpless, they kick ass. But not just "any girl with a fight scene" can be considered an Action Girl. An Action Girl is accompanied by Rule of Cool, and routinely and reliably gets in on the combat. And what's more, she wins.
Because of Double Standards, and their effects on Real Lifesociety most works draw on, true Action Girls are less common than male Badasses. If you want to get more into the why of that, check out the Gender Dynamics Index or our very own Action Girl Analysis page. The short version however, is the concept that Men Are Strong, Women Are Pretty and females should Stay in the Kitchen. For a very long time, females who did something outside of waiting to be rescued by men were unusual and rare. Even now, women aren't automatically assumed to be able to fight and protect themselves the way men are. Society has progressed since then and Action Girls are popular and more common than ever, but girls still haven't completely caught up with boys when it comes to expectations in media, hence the continued existence of this trope.
That being said, one must watch out for the dreaded Faux Action Girl. With the popularity of the Action Girl increasing, creators are trying to slip them in for more appeal and political-correctness, without actually giving them a chance to show themselves off. The "Action" part of the character is left as an Informed Attribute, with characters constantly playing up how much of a badass she is, and yet when it comes to facing the music, she proves otherwise by being a Damsel in Distress or suffering the effects of being on the wrong end of a Curb-Stomp Battle, assuming she gets any action at all. Basically she can talk the talk, but she can't walk the walk. Oh, and if she's on the right end of a Curb-Stomp Battle, she's a Dark Action Girl.
Sometimes an Action Girl can start off well, but derail into a Faux Action Girl or a full-on Damsel in Distress over time, with no adequate justification for it. This is known as Chickification.
When the Action Girl is mixed with the Smurfette Principle trope, she is called a "minority feisty."
Compare the Action Girl with her Evil Counterpart, the often far-more-aggressive Dark Action Girl, and the more mundane versions You Go Girl and Plucky Girl. Not to be confused with Affirmative Action Girl, who is just a girl added to the cast in an adaptation or new season to balance out the gender ratio, no matter what role she actually plays (though, often, the girl is an Action Girl herself).
Not to be confused with Action Girl, a comic series about an action girl.

Posted by Unknown at 2:40 PM No comments: