I've just got another trope for you guys today. Today's trope is called Bad Humor Truck, and is one that I have never actually seen used before, or maybe I have and it was just before I understood the concept of tropes. Either way, here you go: 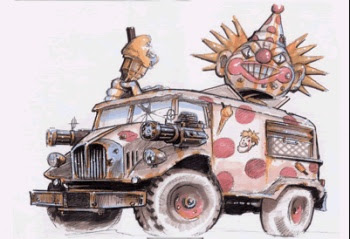 This truck serves 41 flavors of TERROR AND CHAOS!

Ah, the ice cream truck. An all-American staple of childhood. But what's this? The truck's driver is a Child Hater who's doing this as a front to sell drugs? Or maybe he's a pedophile who can't keep his Mr. Softie in his pants? Or, worse yet, he's an uncaptured serial killer who's keeping the bodies between the fudge pops and the Creamsicles? And his truck is either an Alleged Car (either played straight or exaggerated), redesigned from a paddy wagon or a discarded military vehicle, or looks as if it was featured on an episode of Pimp My Ride (Truth in Television: there really was an episode of Pimp My Ride in which an ice cream truck driver calls upon Xzibit and his ride-pimping crew to make his ride a cool one).
For some reason, ice cream truck drivers in fiction are hardly ever as wholesome as one might expect. The trope is named after the Good Humor ice cream company. May overlap with Monster Clown.