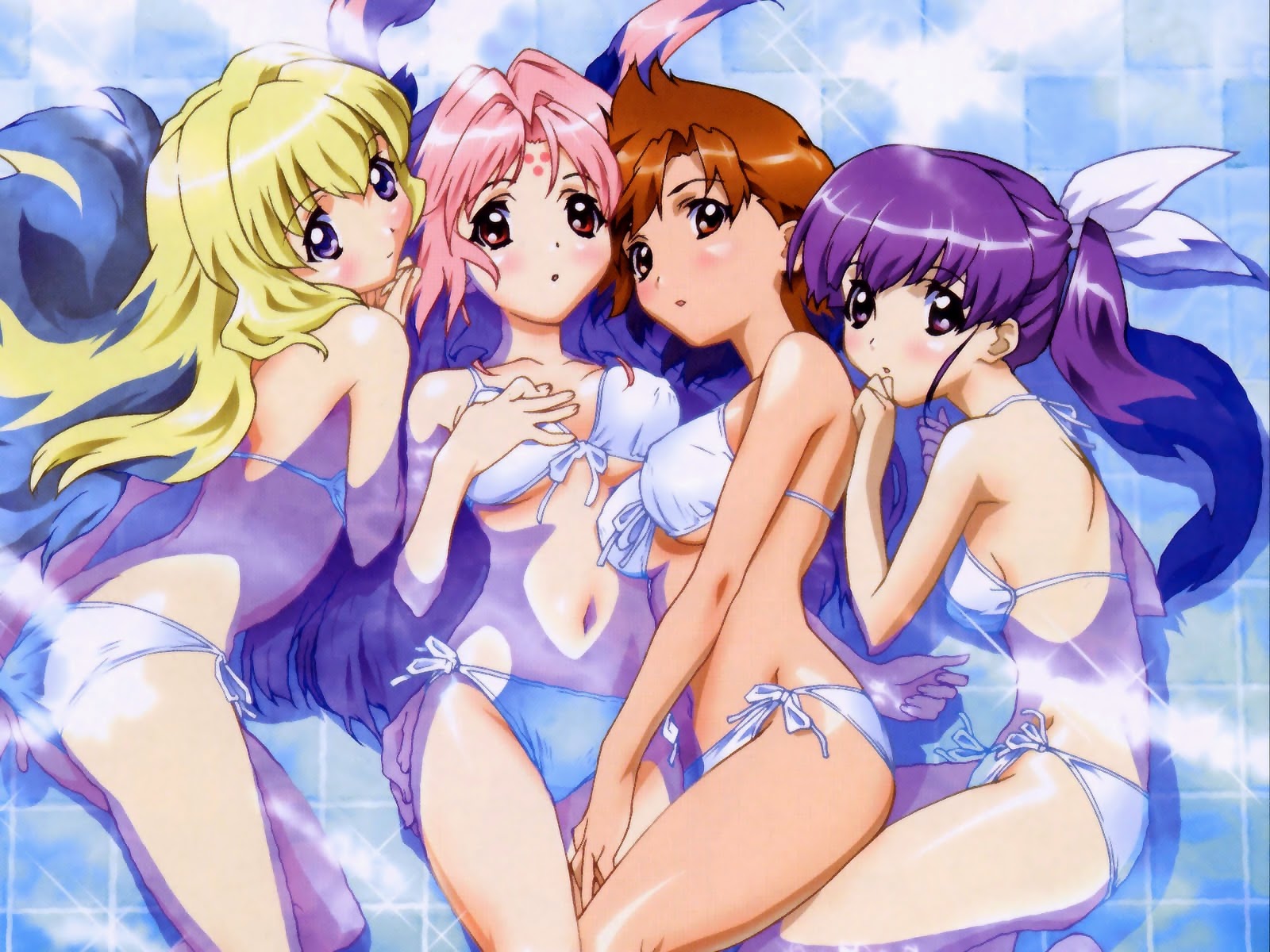 Ecchi has become much more prevalent in anime these days. And as its popularity grows it seems almost like each anime is trying to outdo the other in perversion to the point where they neglect the story itself for the sake of T&A.

As a guy, I can freely admit that I love ecchi. If there is one thing the Japanese know how to do, it's draw their women. Despite that, I often find myself disgruntled by the lack of actual plot and character development in most of the newer ecchi.

Fortunately for us, Girls Bravo doesn't do that. While the story itself has more scenes of random nudity, boobies and panty shots than many other anime, it also has an incredible amount of character development and plot to go with it. And get this; the ecchi comedy is actually funny. It's not like these newer anime where you see a pair of boobs and your only thoughts are: "Okay, now what?"

The story of Girls Bravo is about a high school student named Yukinari Sasaki, a boy who is so afraid of girls that his fear actually turned into an allergic reaction. Yeah, he gets a rash whenever girls touch him. The poor guy. Fortunately, after having a run in with his busty neighbor who, for some reason beyond my ability to comprehend, was in the shower, Yukinaru gets kneed in the face and thrown into his tub.

Poor guy? Not really. You see when his neighbor Kirie smashes her knee into his nose and he ends up in the bathtub, Yukinari is magically teleported to the world of Seiren; a world where about 99.999999% of the population is made up of women.

Sounds like his worst nightmare, right? Well, it probably would be, if it weren't for the fact that the first person he meets is Miharu Sena Kanaka, a gorgeous girl with pink hair, a generous figure and an appetite that makes Son Goku look like a forty pound weakling. The good thing about this meeting is that Yukinaru finally finds the one girl in the entire universe who does not give him allergies.

Naturally, it took having him get sent to another world via having his face smashed into find her, but who wants to sweat the small stuff.

Without giving too much away, while the story itself sounds kind of cliche'd, it's actually really fun to watch. This is one of the only anime that I actually liked so much I went out and bought the entire two series dvd collection of. It's THAT good. If you are a fan of ecchi, fanservice, and watching as a young man with a serious girl problem (pun very much intended) grows into himself, this is definitely an anime you'd enjoy.
Posted by Unknown at 1:11 PM 15 comments:

Email ThisBlogThis!Share to TwitterShare to FacebookShare to Pinterest
Labels: Ecchiness is life

Rather than give you guys a review, today I have decided to address an anonymous review who posted on one of my earlier chapters in Harry Potter and the Heir of Slytherin.

I don't remember the exact words, but the An review called themselves Eyeroll, and their review was basically talking about how the relationship between Harry and Lisa Crawft is completely unrealistic and that no 11-12 year old kids would be that close to each other physically. They went on to mention how Harry placing his head in Lisa's lap was disgusting and then said they should report my story for pedophilia.

After laughing for several minutes I ended up deleting the review, but still felt the need to explain myself.

The relationship between Harry Potter and Lisa Crawft is based on a real life relationship I had with a girl when I was younger, between the ages of 6-14. This girl, who shall remain anonymous, was very close to me, we literally did everything together. And yes, we were so close that it would not be unusual to find us snuggling together under a blanket or for me to have my head in her lap while she ran her hands through my hair. We did this when we were 9-13, and only stopped later on when my friend got a boyfriend.

In some ways you could say our relationship was sort of the inverse of Harry's and Lisa's. I had the major crush on her, but she had placed me firmly in the friend category despite how intimate we were. I never did date her, and she ended up moving away at some point and we eventually fell out of contact. That being said, the relationship we had was almost exactly like Harry's and Lisa's right down to how we acted with each other. It's the reason I found Eyeroll's words so funny. He called their relationship unrealistic when I was using a relationship I had with someone else as an example.
Posted by Unknown at 10:45 AM 4 comments:

Hogwarts Shuffle is a Harry Potter/Shuffle crossover that combines all the harem goodness found in Shuffle with the humor and writing style expected of fanfic author GinnyMyLove. The story itself is decently written. The authors only real issue is his punctuation. He tends to put commas where periods are needed, periods where commas should go, and sometimes just adds a comma or a period for no apparent reason. This tends to disrupt the flow of the story, especially if you're a grammar nazi, but if you can get past that, it's not too bad.

I think my biggest issue with this story were the Harmony and Harry/Ginny moments. I'm not afraid to admit that I have a personal biased against those two pairings. I find Harmony repulsive because Hermione reminds me of my sister and I don't want to think of her in a manner anywhere close to sexual; I had to skip every part where Hermione flirted with Harry or something of a physical nature happened because of this. And I personally don't like Ginny at all. Aside from the fact that her character was never developed and she just sort of comes out of left field all of a sudden because Harry's suddenly got this big green monster inside of him (Cough love potion cough), what little of her that we do see makes her come off as a fangirl. Let's face it, we only see her a few times, and except for when she's snogging some guy she's dating (to get Harry's attention, of course), she usually comes off as a fangirl. I mean, wasn't she dreaming of being Mrs. Potter long before she had ever met Harry? Sounds like a case of fangirlish hero worship to me.

The other problem I had, one that is not as large but still annoying, MASS OOCness. Almost every character in the story was OC in some way. Now, I don't mind Harry being OOC. Let's face it, if you're writing an HP fanfic about Harry Potter, he's going to be OC. That's why we write Harry Potter, to turn our favorite green eyed, scar-faced wonder into an actual hero. However, while OOC Harry is acceptable, OOCing other people for no discernible reason is not.

Let's take Hermione as an example. Hermione Granger is a studious girl who doesn't have any experience with romance. The closest she comes to flirting in the books is arguing with Ron, and only a fool would actually think that's flirting. From the first chapter of Hermione's introduction in Hogwarts Shuffle, we see her blatantly flirting with Harry, laying in his bed, sitting on his lap, making sexual innuendos at his expense. This is not Hermione Granger. Not only is it not Hermione, there is no discernible reason for her to change so much. For the entire summer she was stuck with Ron and Ginny, and let's be honest here, neither of those two would have made her turn into this flirty and vivacious woman.

Because of how many characters had nearly 180 degree personality changes, I couldn't get into the story as much as I might have. Overall, I would rate this story a 6.5/10 for quality writing and an original plot, but take points away for OOC characters without showing their development first, grammatical errors, and my own personal biased. For those of you who like Harmony or Harry/Ginny, I would recommend this story. For those who don't, I would suggest reading the first few chapters to see if it's something you can hop on board with.
Posted by Unknown at 12:31 PM 5 comments:

The different kinds of POV in storytelling.

Hey everyone, just updated my Writing Tips section. As asked this tip is about the different POVs, or point-of-view, that are found in storytelling. It had a lot of information in it, so be sure to read it thoroughly. If you have any specific questions ask me on this post and I'll do my best to answer:

This is the link to my writing tip this week: POV
Posted by Unknown at 10:17 AM 6 comments:

The Q&A for chapter 31 of Ashikabi no Shinobi is officially up for those of you who are interested. (^_^)
Posted by Unknown at 4:21 PM 4 comments: