Waiting... for a trope

There's not much to say today, mostly because I've decided not to do any serious updates to this blog. Because I've decided to go with the changes I want to make, I felt adding anymore to my other pages would simply increase the amount of mess I have to work with.

You can expect me to update my Writing Tips section this Saturday after I make all of the changes and updates to my blog that I need to.

If you have any questions, comments, or concerns, please address them here.

And now for your trope! 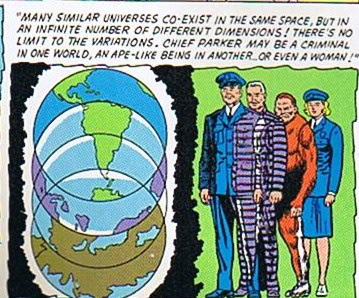 The criminal and the ape-thing, OK. But awoman?! That's just silly.

A story in which the characters we know are seen in a reality that's somehow different, often disturbingly so. If they can access multiple alternative universes at the same time, that's The Multiverse.
Sometimes everyone has an Evil Twin. Other times, everyone has a twin that's just a little different. Allows the goodies to be baddies for an episode, or for half of the cast to be killed - but not really. Sometimes it's just part of Side Story Bonus Art.
Given a long enough run, any series based on SuperHerocomic books will run into these.
If the writers want to depict an Alternate Universe, but the show's genre would not usually allow an Alternate Universeper se, the depiction may be accomplished via an extended Dream Sequence.
Not to be confused with Alternate Continuity, Alternate Reality Episode, Alternate Universe Fic or a Constructed World.
May be meta-caused by aforementioned Alternate Continuity; as well as by any of the three varieties of Discontinuity (Canon Discontinuity, Fanon Discontinuity, or Negative Continuity).
Specific variations:
Another type of Alternate Universe is that which doesn't take any of the characters, but instead takes concepts, or machines. Such Alternate Universes are uncommon, but exist. Gundam is the perfect example, with no less thanseven separate universes, all of them rehashing essentially the same plots and concepts — in particular, the conflict between those living in space and those living on Earth. With giant robots.
Compare with Masquerade, where a world might look the same, but something hidden makes it different.