There is still isn't much for me to say. Life is moving on and I'm struggling to keep my busy schedule from falling apart at the seems. I don't think I've ever been so busy in my life: writing the sequel to my first novel, getting my first novel edited, writing fanfiction, working, networking, finding out the best and most cost efficient ways to market my book. There's a lot to be done and I feel like I hardly have the time to do it.

Ah well, such is life.

In either event, I think enough time has past and I've gotten enough reviews to write a Q&A for chapter 30 of Ashikabi no Shinobi. I'll likely post it sometime this weekend after I finish making all the changes and updates to my blog so it's easier for you all to navigate.

I have very little more to tell you. The first draft of chapter 19 for Harry Potter is finished. I'll likely have the revisions done by next Friday, so you guys will be getting the chapter a week early, and a bonus chapter from Devil Ninja to boot. That's about it, if you have any questions, comments, concerns, or you want to inform me of some major life changes that could drastically effect the world around us, please feel free to leave a comment.

And now for your trope! 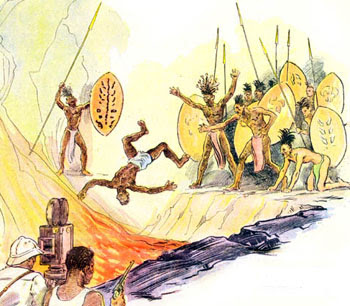 Sacrifice to the God of Smoking Mountain

Tribesman: Quixiquoddal, the Volcano God is angry. We must appease his wrath!
Fr. Ted: Volcano God! What kind of nonsense is that? I'll ask you one more time, will you not give Catholicism a try?
Tribesman: It wouldn't catch on. We don't agree with the Pope's line on artificial contraception. It's the '90s for God's sake!
— Father Ted, "Kicking Bishop Brennan up the Arse

People who live on volcanic islands are frequently living on a ticking timebomb. When that volcano blows its stack, you never know if you're going to get a gentle, easily-avoidable stream of lava, or an apocalyptic explosion. With such explosive power on their doorstep, the natives of many of these islands figure that the volcano is home to a fire god, who can be kept safely dormant through proper care and feeding.
The volcano god's favorite food? Virgins, of course. And if the hero or the Love Interest gets picked to take a half-gainer into the caldera, the Big Damn Heroes better get up there quick before things start to heat up... And if the offering is somehow unsuitable, the results can be quite explosive.
How much basis in reality this trope has is debatable. The Polynesian ancestors of the Hawaiians did practiceHuman Sacrifice and regarded not pissing off their volcano as serious business, but at the same time they would have never sacrificed women due to their belief that females were spiritually defiled. Either way, a volcanic calderafilled with lava is sure to be very hot, so it might be difficult to simply toss people in the top.
A subtrope of Human Sacrifice. Compare and contrast Captured By Cannibals.