I've got some exciting news to tell everyone! As of today, the second to last process of publishing my novel has been finished! My editor turned in the last set of corrections yesterday, and I just finished adding those corrections to my story! All that's left is the proofreading and then the publishing and my book will be on the market!

...Oh, sorry, looks like I got a bit carried away there.

In either event, with the publishing process nearly complete, I should have a bit more free time on my hands, I hope. This could mean faster fanfiction updates.

And speaking of which...the next story I plan on updating is Namikaze's Return. I hope you guys are looking forward to that one. It has been a while since I posted a chapter for that.

Since I don't have much more to add right now, I'll leave you with a trope today. And let me know if you actually like me posting tropes because if you think it's annoying, I'll stop. 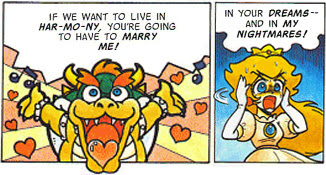 
Ice King: You said you'd marry me, if I was the last person in Ooo.
Princess Bubblegum: I'm pretty sure I never said that.
—Adventure Time
"You don't have to speak to me as a prisoner any more. You won't be a prisoner after today, you'll be my wife. [beat] I suppose that's a different kind of prison..."
Game of Thrones

The villain's Evil Plan isn't just to take over the world, or to kill the hero. His goal is far more personal and sinister – he's going to force the heroine to marry him.
This is often a G-rated version of Rape as Drama — in fact, the whole concept usually carries at least an implicit threat of rape when you think about it. (This can be a common source of Fridge Horror for adults looking back on the many, many beloved works aimed at children that use the trope.) It's an intensely personal threat to the heroine, one that plays up her femininity and vulnerability, especially since the marriage is assumed to be permanent and irreversible. If the heroine has a heroic male Love Interest, as she usually does, it serves as a threat to his masculinity as well. It also provides a convenient excuse for scenes where the villain puts the heroine in compromising positions. And it can lead into all sorts of Wedding Tropes —Speak Now or Forever Hold Your Peace is almost mandatory.
Often, the villain is motivated by twisted affection or at least lust, but it can also just be about getting legal access to her money, property, or title. On the other hand, he might just be the kind of sick bastard who enjoys the idea of keeping someone trapped in a legally binding relationship that they find repulsive for the rest of their life. Or maybethe heroine herself is pretty much irrelevant, and it's really just about claiming ultimate victory over the hero by stealing his woman.
If the villain does this by kidnapping his desired bride, it's a subtrope of I Have You Now, My Pretty; when combined with Villainous Crush, it's also Abduction Is Love. If he threatens someone else and offers to relent if the heroine agrees to marry him, that's the G-rated variant of the Scarpia Ultimatum. In cultures with Arranged Marriage he might convince the heroine's parents or guardians to force her into marriage. Evil Sorcerers will use their powers to Hypnotize the Princess. The villain might even attempt to trick the heroine into unwittingly doing something that counts as a legally binding wedding. (The Shotgun Wedding, where a third party forces the couple to marry, is only an example of this trope if one of them planned the whole thing.)
Female antagonists who use this trope are much less common than male examples, and are usually portrayed a bit differently. They're almost always motivated by a Villainous Crush (since Villainesses Want Heroes), and may even verge on being a really unstable Abhorrent Admirer rather than an outright villain; for some reason, femaleGold Diggers are more likely to rely on seduction rather than coercion. Their male victims are also much more likely to foil the villainess' plan on their own, while female victims almost always have to be rescued by their male love interests.
There is even a trope for the special Big Damn Heroes moment when it prevents this kind of marriage: Speak Now or Forever Hold Your Peace.
Not to be confused with Shotgun Wedding or The Baby Trap.
Related tropes: Villainous Crush; I Have You Now, My Pretty; Disposable Woman; Damsel in Distress; Hypnotize the Princess; Mad Love; Abhorrent Admirer; Abduction Is Love; Save the Princess. Often Truth in Television — in fact this one's a very old real-world practice — but it's way more depressing in Real Life.
For in-depth information on the subject, see the article

on That Other Wiki.

Posted by Unknown at 1:23 PM No comments: