Sorry this post took me so long to get out. I had some issues with my computer and had to run a system restore to fix them.

Fortunately, I don't really have a whole lot to add today. Everything is proceeding pretty much as scheduled and I see no reason for that to change in the future.

Remember, if you have anything you want to say, anything at all, I'm here for you.

And since this post was so short, I think it's time I gave you guys a trope! 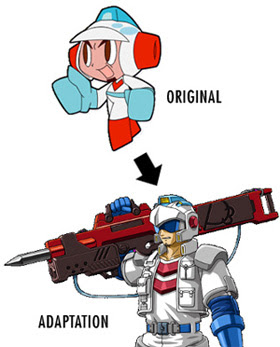 
"I'm not really into this fighting stuff unless it's in a courtroom. ...Oh, and with words!"
—Phoenix Wright, playable fighter in Ultimate Marvel Vs Capcom 3 note

There are characters in the media who are known, simply put, for being less-than-dangerous. They might even be The Load, or at least aDamsel in Distress. When danger rears its head, the character generally beats feet and lets their tough-guy friends deal with the problem.
But then, for some unexplainable reason, when the work is being adapted into another type of media, the character is made a bonafideBadass. The reasons for this are myriad. Regardless of the whys, the producers have to be careful because quite often the character wasdefined by being a Non-Action Guy, and turning them into a Badassmight result in a fandom backlash.
And yet the opposite is often true, especially if the character is The Scrappy whose job was to get captured by the bad guys and rescued by the real heroes. Actually turning such a character into someone useful can be warmly received by fans who may have wanted them to be like that from the beginning. In this way it can also result in a more preferred version of the character, as well as possibly making a Ret Canon to the original character.
Be aware that the main intention of the trope is one of non-badass to a solid badass. A character just having a different level of power doesn't really count unless it changes the way their character is able to navigate through the story, such as making them an Empowered Badass Normal. If that was the case then with all the different power levels Superman has had over the years he would count for this trope, as a result of Power Creep, Power Seep.
When this is done to a real-life person, then it's Historical Badass Upgrade.
A variation of Took a Level in Badass. For a sister trope specializing in female characters, see Xenafication.

Posted by Unknown at 4:18 PM No comments: