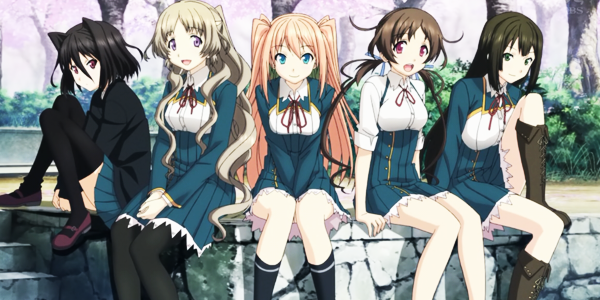 The Harem genre of anime has become increasingly popular in recent years. Back when I first started watching anime, like, in the early 1990s when Dragon Ball Z and Sailor Moon were all the rage, harem anime weren't that well known. I think the only one out during that time which really took off was Tenchi Muyou, which I actually thought was a really cute story.

The year 2000 is when the harem genre really started taking off. The anime Love Hina was a major hit in Japan and around the world. I think in Japan alone the manga sold over 16 million copies and 1 million DVDs. You could go so far as to say it's the anime that started it all. 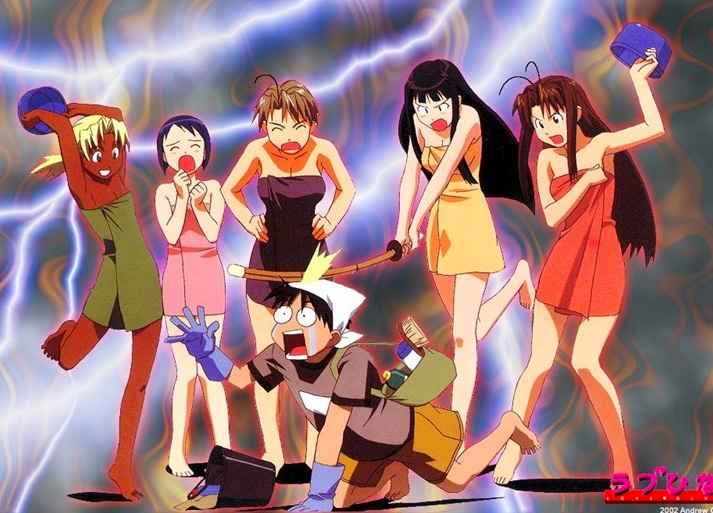 Back when the harem genre was picking up speed, most anime and manga followed along a standardized story plot. Basically, each episode would involve the Main Character, who almost never failed to fall under the Hapless Hero or The Unlucky Everydude trope, and one or more of the heroines finding themselves in an awkward situation where the Main Character would end up getting the crap beaten out of him.


Yeah, like that. Anyway, this sort of became a theme with harem anime, a formula, if you will. And writers and directors and mangaka of all kinds pretty much abused the shit out of this formula, milking it for all it was worth until the entire idea became so contrived and cliche'd that it just stopped being funny. Really, there's only so many times I can watch MC #3 getting his ass beaten by Heroine #8 before it becomes boring. This is why anime like Infinite Stratos and Maken-Ki were such epic fails. They tried to follow this formula long after it's concept became dull and contrite. 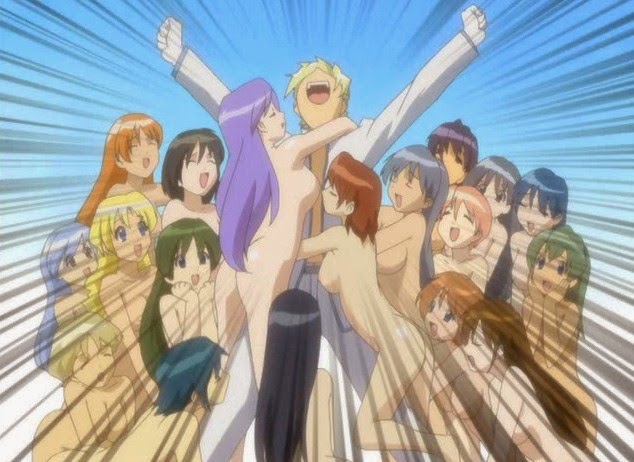 In order to compensate for this general lack of interest in the old formula, anime began upping their perversity, which actually gave way to the ecchi genre becoming more popular. The first anime to really do this was, of course, Girls Bravo. In some ways, Girls Bravo sort of revolutionized the way Harem anime would work. It still followed the same general formula: MC gets into awkward situation with one of more heroines and ends up getting his ass kicked, but it also brought a lot more to the table, not the least of which was a whole lot of T&A. 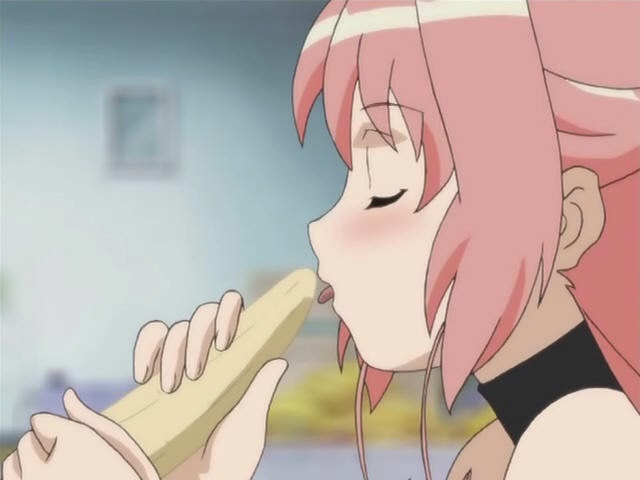 The first of these many tropes was, of course, Miharu Sena Kanaka. This was the first Main Heroine and love interest to follow the ditsy air-head trope. Sure, you had Mutsumi Otohime from Love Hina, but Miharu is the one who really took off with this trope. She was air-head, she was ditsy and she had food on the brain 24/7. Despite this, she was actually a likable character. I think her general ditsiness and compassion was so endearing you simply couldn't help but love her.

Of course, like most anime tropes, the many ones employed here eventually became overused to the point where some anime cared less about the plot and more about the-- 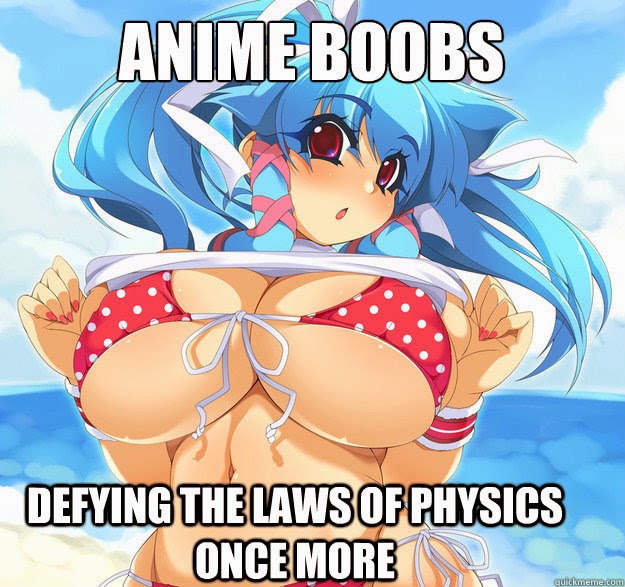 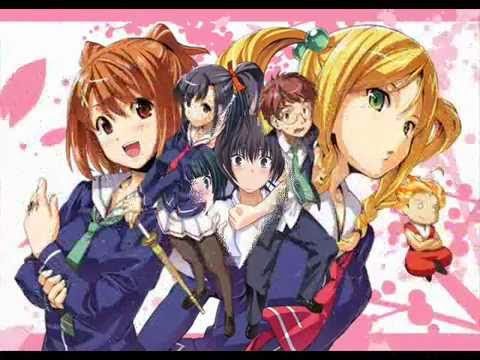 Despite how horrible most harem anime have become in recent years, it's still an extremely popular genre. And why? What makes this type of anime so popular?

Because it's a Guilty Pleasure, of course!

One of the first things you need to realize about these anime is that most of the people watching it do not do so for the plot. They're not looking for an epic story or an incredible journey. They watch it for the boobs and the butts and the panty shots. They watch it so they can put themselves in the position of the Main Protagonist who, let's face it, in a harem anime is almost ALWAYS a complete and utter loser who no girl would date in a million years. In fact, the lack of personality and general coolness in the MC is actually done for the sole purpose of allowing US, the people watching it, to put ourselves in the MC's shoes and imagine what it would be like to have a harem of gorgeous women, because nothing screams Alpha Male more than having a harem of beautiful, busty women at your beck and call.

All Men are Perverts.

Of course, I don't exempt myself from this. I watch harem anime as well, and I've seen almost all the ones out there so far. Sure, there are some I hate: Maken-ki and Infinite Stratos being at the top of that list, but I actually do find myself enjoying the Guilty Pleasure of watching some of the better ones.

And that is why I'm going to give you guys several harem anime that I feel you should watch. These are ones that have either broken the mold, are just so ridiculous and stupid they're funny or are a combination of both. They might not be the best anime around, but they'll definitely give you a good laugh.


Number 10 is Tenchi Muyo. As the anime that more or less started the harem genre, this is definitely one that you should watch as a means to get your feet wet. It's cute, it's funny, and the girls are all quite pretty despite how old the anime itself is.

Number 9 is Love Hina. This is one of those classic anime that never really gets old. As the first of its kind, it is definitely something anyone interested in this genre should watch.

Number 8 is Girls Bravo. This was the anime that made me like the harem genre. It was the first time I'd ever seen cartoon boobies and I have to admit that I actually squirted juice out of my nose laughing so hard when I watched some of the shit that goes down in this anime. It's hilarious and I would definitely recommend it.

Coming it at number 7 is The World God Only Knows. This is an anime that broke the mold. In a time where most harem anime's only saving grace was how many times the Main Character's face could get randomly shoved into some girl's cleavage, this one decided to go against the grain. Instead of relying on tits and panty shots, this anime relies on comedic jokes, impossible yet hilarious scenarios and a main character who is a complete video game nerd but still manages to seem impossibly cool. It's a must watch.

Number 6 is Princess Lover. This is an anime that I feel is underrated. While certainly not very good, it's not really bad either. It has a decent plot, an okay story and some interesting characters. I think what made me put this up here is that the main character isn't some kind of dweeby loser who would never actually get so many girls to like him. He's actually kind of cool, and he's pretty good at using a katana to boot.

Number 5 is Shuffle. I put this anime up here because the Main Character in this anime is one of the ONLY harem protagonists who actually mans the fuck up and chooses a girl to be with at the end. That's right, this story actually has the hero CHOOSING a girl to be with. So many times I would get frustrated watching an anime because the main character and his love interest would dance around each other throughout the entire series, and even at the very end, where you THINK you're going to finally watch them become a couple, the anime STILL manages to disappoint you. This one doesn't. Therefore, it's on the list.


Coming in at number 4: Kampfer. This anime is another unique one. Aside from being a harem, the main character also has his gender swapped. That's right, in this anime, the dude turns into a chick and battles against other chicks. Even then, he STILL manages to get a harem, which I find hilarious.

Number 3 on this list is Zero no Tsukaima. I chose this anime for several reasons. First, it is one of the earlier anime to introduce the Tsun-loli trope, which makes it unique. Second, while I don't really like the main character all that much he, unlike many others of this genre, actually has moments of pure awesome. He also ends up marrying the main heroine at the end, which puts him up a notch in my book.


Number 2 is High School DxD. Now, if I'm being honest here, High School DxD is not a very good anime. The artwork is nice and the female characters are all lovely, but the plot, while potentially epic, doesn't really reach it's full potential because the director focused more on the boobs than expanding the story. I think the Light Novels of High School DxD are WAY better; it's leagues above the anime and goes way more in depth. That being said, I did enjoy watching the series...even if most of the series consisted of tits, tits and more tits. Did I mention tits?

Coming in at number 1 is To Love-Ru and To Love-Ru Darkness. This is probably my biggest Guilty Pleasure in anime. I have no justification for why I like this. The story line is dumb, the main character is a fucking idiot, and EVEN AFTER he confesses his love for Lala and Haruna he STILL has trouble with women. It is, in all regards, a terrible anime if you're looking for a good story with epic character development. That being said, I still LOVE this anime. Lala Satalin Deviluke is by far my favorite heroine of all time. The female characters are all very unique and have interesting personalities. The story is so utterly ridiculous that it's hilarious and even though the only thing it has going for it are the hot female characters, I still love it.

Then again, perhaps it's the hot female characters that I love about it. Who knows.
Posted by Unknown at 10:43 AM 2 comments: