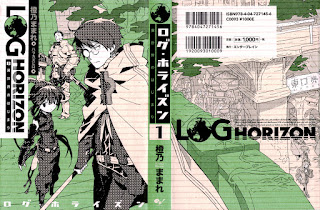 The first thing you need to know about Log Horizon is that it's thick, and by thick, I mean there's a lot of world building and in-game mechanics involved. A good deal of the first half is mostly about building the world itself. Now, before you get your panties in a twist, this isn't necessarily a bad thing. While the beginning world building makes this book feel similar to an MMO encyclopedia or the Dungeon Masters Guide, it's a necessary component to understand how this world works. 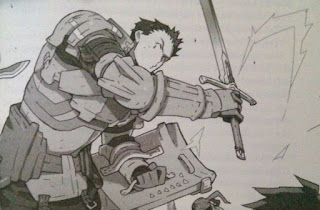 Log Horizon takes place in a world called Elder Tales, which, before the book started, was originally an MMORPG, the largest one in the entire world. Millions of people played this game, until one day when the new expansion pack came out, and several hundred thousand players found themselves trapped within the game - except, it's not a game anymore. The world is real. You can eat, breath, feel pain, you have to eat now. The world of Elder Tales has ceased being a game and is now their reality. In order to properly understand how this world works, you need to understand the mechanics behind it, which is a combination of real world science and MMO game mechanics. Hence, the reason for it's thickness. 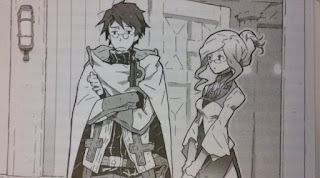 After you get past the world building and MMO mechanics, the game picks up the pace and our characters set off on a journey. To be honest, I felt the mechanics were a little more interesting than the journey simply because of how involved it was. That being said, the journey our characters went on was still interesting and enjoyable. I also love the characters who have been introduced thus far. Shiroe, the main character, is one of those genius types who does well with strategies and making up plans, but isn't so great at interacting. He's not unsociable, he's just socially awkward, which I actually like about him. Noatsugu is kind of his opposite. He's loud, brash and perverted, but a good person all around. Of course, my favorite character has to be Akatsuki. She's the most adorable little assassin I've ever read about. I love her. She's straightforward, kinda blunt actually, and has this stern and upfront personality that I can't help but love. Overall, I felt the characters were great, the world building was excellently done and interesting, if a little on the thick side, and the story was definitely one that I would recommend to anyone who enjoys the "trapped in a video game" genre of books.
Posted by Unknown at 7:33 PM