LeroyallenXnaruto: I read on your Blog I think the part for questions and answers and you said that the people in the DxD verse are stronger than those of the Naruto verse.
I think you're wrong. For proof you should check out "Naruto the fatherly sage" by fairy tail dragon slayer the seventh chapter to be precise has Naruto's stats and all of them are cannon and not fabricated.
If that doesn't convince you you should check out his other story. "Naruto the human alien" the second and most recent chapter also has proof of how strong Naruto really is..

Phoenixblade Hm... while an interesting chapter, I'm not so sure about the whole "Excalibur Ruler being used to subvert Naruto's will". Don't get me wrong, it's not that I think Naruto should be able to resist it, it's more that it's extremely annoying and a fairly bad plot device, and it leaves me with a kind of "bad end" feeling. Over all I can't say I'm unhappy with the chapter considering how much happens that has a good feeling to ti, but that ending doesn't make me like it. So I'm stuck with merely calling it "interesting" and hoping the coming chapter makes up for my lack of enthusiasm.
I know that he can't simply breeze through everything. Let's face it that would unrealistic and incredibly boring. There are bound to be trials and tribulations, and I know that being the "hero" of the story he'll come out fair over all. ... Still can't help that "bad end" feeling though.

Answer: I do understand your point, but then, that's also kind of the point. I want you to have that, "I've got a bad feeling about this," thought when you read that ending. It creates tension. You read this chapter and wonder to yourself, "how is Naruto going to get out of this? Can he even get out of this?" It's written this way with that purpose in mind.

Slydino: Great chapter. Not sure I like where the story's going. I mean Issei is great and all but I don't like having two harems it leaves a bad taste in my mouth it's ok to give him Asia but I think Akeno would be a much better fit with Naruto. Just my opinion though. Anyway great chapter and can't wait for the next one.

Answer: I don't consider two girls a harem. To me, a harem is when one male is in a relationship with three or more women, and I'll tell you right now that Issei isn't getting anymore women. I had him get with Asia because it gives Issei someone who helps him overcome his limitations by wanting to protect her, and I added Akeno because, if I'm being honest, I don't think she and Naruto would make a good couple unless I OC her. Akeno is a sadist, and Naruto isn't really the type who's into S&M. Issei, on the other hand, I can see eventually being turned onto it.

LordGhostStriker: isn't Ruler's weakness is that your Will needs STRONGER than the person your trying to control?

Answer: Actually, it never says that the will of the wielder must be stronger than the person Excalibur Ruler is being used against to work. It just says that Excalibur Ruler grants absolute control over other beings. I imagine it won't work on some beings though, like Ophis and Great Red, and maybe the Heavenly Dragons Ddraig and Albion. 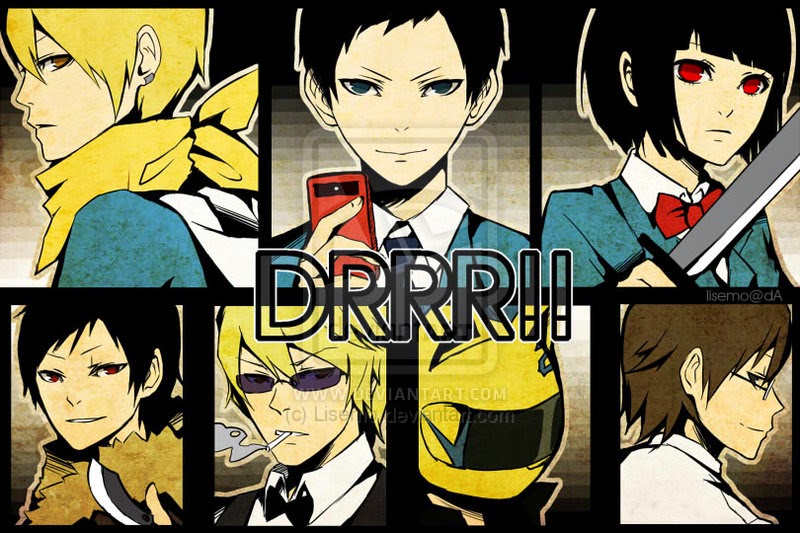 I've decided to begin reviewing some of the anime that came out and have a sequel currently being aired this 2015, and what better way to start this off than with a bang? Durarara!! was definitely one of the better anime to come out this season, and I'm going to tell you why. 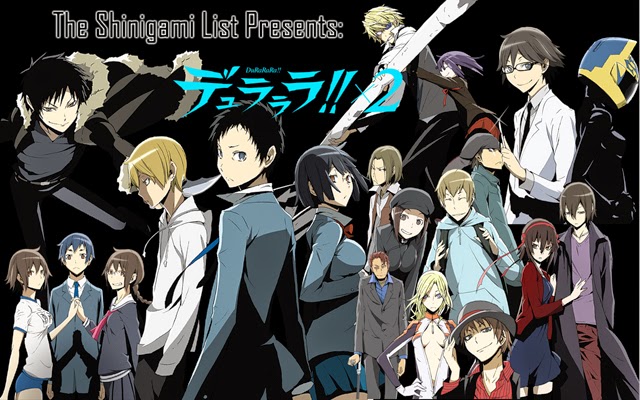 To understand why Durarara!! is a great story, we must first look at the cast. There are a lot of characters in here for people to get behind. If you don't like one character, then you can always choose to root for another. Unlike most anime that keep their cast small, Durarara!! goes big. There's so many diverse characters, each with their own unique personality that you'll never find a dull moment in this anime. 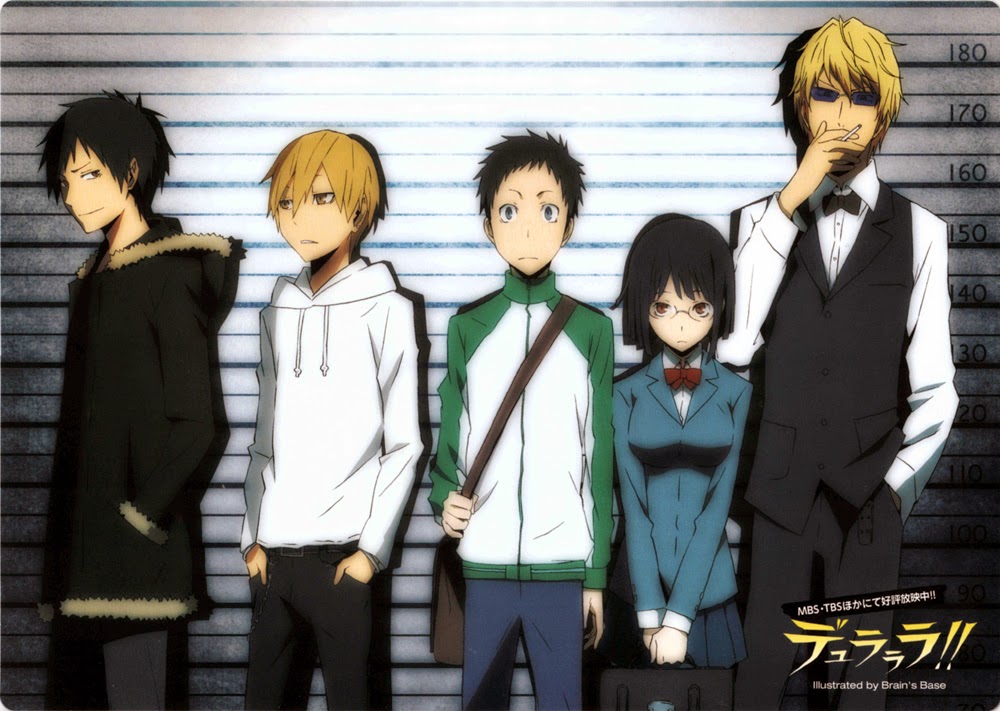 And, of course, you can't look at an anime without looking at the artwork. In a year where almost every anime looks like they've been created by a cookie-cutter, this is one of those anime where the art-style is more unique. Most anime in this day and age look almost exactly alike, from the way their eyes are shaped to the style of their face and everything in between. The anime that keep a more original style are becoming few and far between. Durarara!! doesn't suffer from this problem of mundanely drawn characters and uninspired animation. While not 100% original, it still maintains a uniqueness that makes this worthy of taking note of. 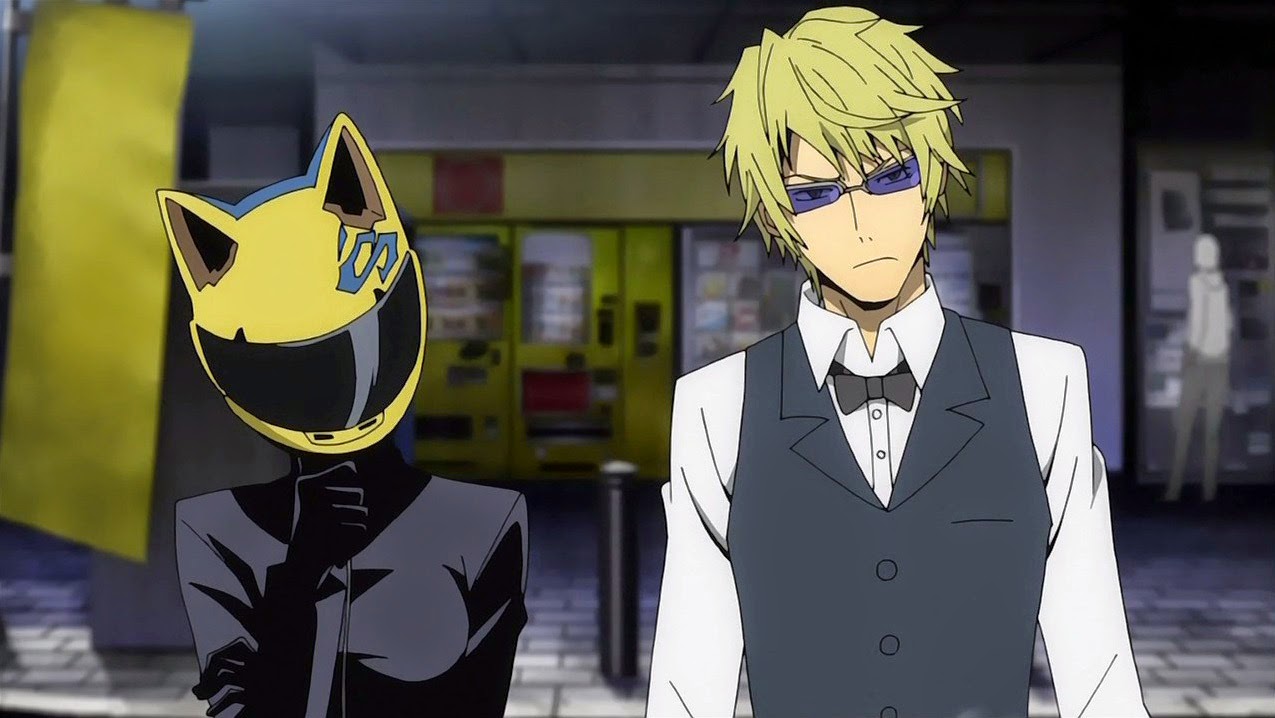 We've looked at the characters, so now we need to look at the story. The story seems almost like a typical slice-of-life when you first think about it: a young man moving to the city in order to live a life of excitement. Sound familiar? But wait, that's not all. After meeting up with his friend, this young man learns that the city has some people in it that you just don't want to cross: a superhumanly strong man, a dangerous information broker, a gang known as The Dollars, and a headless biker known as the Black Rider. From learning this alone, we know that stuff is going to go down in this anime, but what makes the story truly unique isn't just the life of the young man, one Mikado Ryugamine, but how the anime follows the narratives of all its characters equally, showing how their lives intersect to create a greater plot throughout the series. It's a very intricately woven story, and one of the few I've seen that really feels like every aspect is somehow connected. 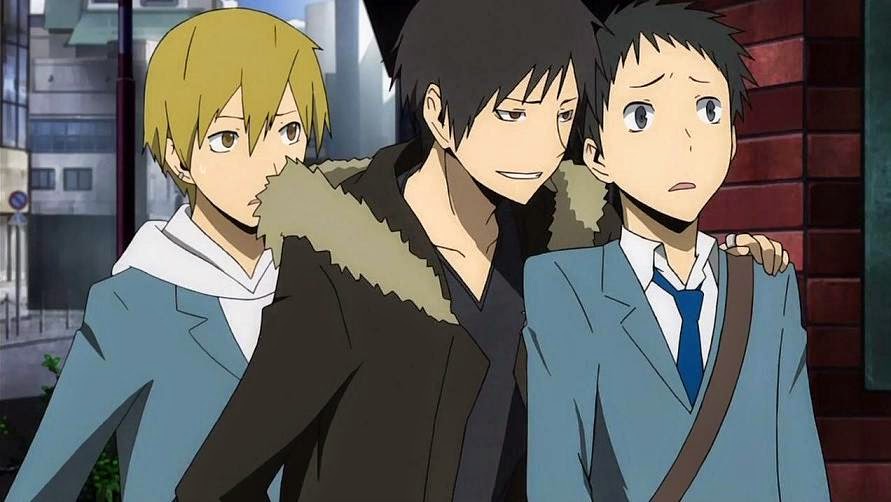 Like all anime Durarara!! is not without its flaws. Fortunately those flaws seem minimal at best. I think my biggest issue is that there are some characters that I just don't care for, which can honestly be a good thing or a bad thing. Certain characters are supposed to be unlikable, so I can't say it's a fatal flaw, and this anime wouldn't be very realistic if every characters was someone you could like. That being said, when a character that I don't like comes on screen, I feel almost like skipping those parts, even if I know doing so will have me miss important parts of the plot.

Overall, I would say this anime rates an 8.5/10. I enjoyed just about every aspect of it, from the diversity of the cast to the intricacies of the plot. There isn't a whole lot that I can say is wrong about this anime.
Posted by Unknown at 8:05 AM No comments: