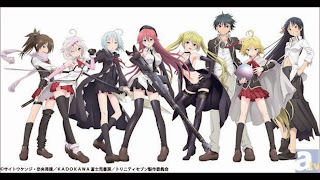 Trinity Seven is an anime that, at first glance, seems pretty interesting... until you get to, I wanna say, episode three or so, and then you realize this is just another harem anime that tries too hard. While this anime does have some things going in its favor, most of the good is smothered by the bad. 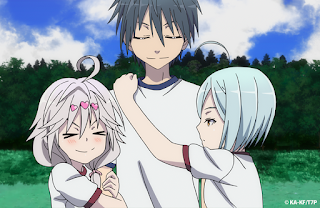 So, why don't we start with the good first, hmm? I suppose I could start by saying that the original premise of the story is quite intriguing. You've basically got a young man living in a small town that was destroyed by what's called a Breakdown Phenomenon, until the appearance of a magus leads him to attending the Royal Biblia Academy... yeah, I know, the name kind of sucks. Just roll with it. You also soon learn that Arata, the main character, is a Demon Lord Candidate, which I guess is this anime's name version of a badass. 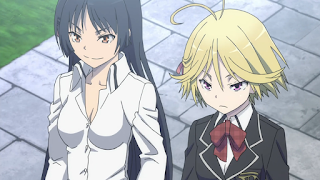 While the story itself seems intriguing enough, there are a lot of cliche's here, first and foremost being the magical high school cliche. I sometimes feel like the only reason Arata was even sent to this high school was so he could find his harem and take over the world, and since this is a very blatant harem anine, While I don't dislike the harem genre, I do when the harem smothers the story into oblivion like this one does. 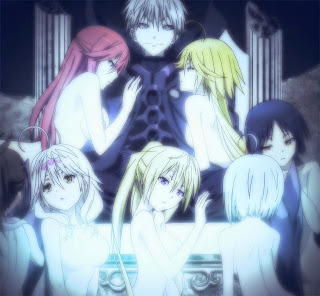 Aside from the stereotypical "magical high school with useless teachers who don't actually do anything" setting, the story itself has a lot of pointless fanservice. Not the good kind of fanservice that makes you laugh, but the kind where you're staring at the screen and wondering why the hell some girl keeps getting randomly stripped naked. The fanservice in this anime isn't funny, and it doesn't add anything to the story. At the same time, it holds itself back, as if the animators tried really hard to make this a serious story with a deeper plot. Unfortunately, they failed epically at this. Trinity Seven not only has the feel of a stereotypical anime with no plot beyond "give Arata a harem," it doesn't go anywhere with the harem itself. They're just sort of there. 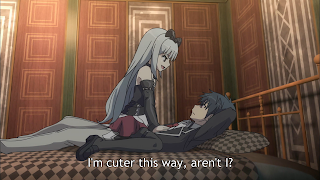 The battles are also really boring, the principle is supposed to be this badass but acts like a pervy old man, and all of the characters feel like cardboard cutouts of archetypes. Because of all the negative qualities this anime has, I can't really recommend it.
Artwork: 6/10
Character Designs: 7/10
Character Development: 3/10
Storyline: 4/10
Musical Composition: 5/10
Overall Score: 5/10
Posted by Unknown at 6:16 AM No comments: