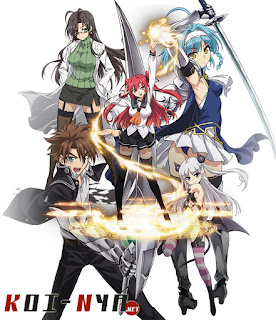 Have you ever watched something and then later on wondered why the hell you watched it? That's kind of what I felt like when I watched Shinmai Maou no Testament. It's one of those anime that I feel really conflicted about. I'm not sure whether to like it or hate it. 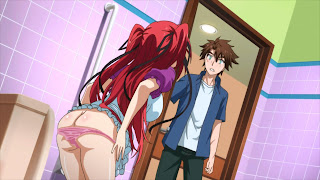 The first thing you should know about Shinmai Maou is that it's like Highschool DxD's annoying kid brother. It's not as good as the older sibling, and it lacks the depth that made its elder counterpart so good. To make up for this lack of substance, it tries to outdo the anime that came before it by being twice as loud, or in this case, twice as ecchi. I swear to God at least 95% of this story was nothing but an excuse to see Mio, the main heroine, naked and moaning like  a vixen in heat. More than once I actually became uncomfortable while watching this simply because of how much this anime pandered to fanservice. I don't think I would have minded having so much fanservice, if it weren't for the fact that it made this entire anime feel like it was trying too hard to be perverted. It felt like the animator got a hair trigger and suddenly decided he was going to make a story that had more boobs than every anime that came before it. 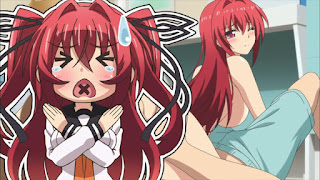 Now, despite my earlier complaint, this anime does have a story, mired though it is in fanservice, and you have to look really hard to see it. I'm sure some people don't even know what the plot is because they got too caught in the, well, in the Massive Plot that is Mio. What's the plot? Well, it's basically Mio is the daughter of the previous Demon Lord, and inherited his power. Because of this, the current Demon Lord wants to steal her power, and it is Harem Protagonist number 6--sorry, I mean it's Basara's job to protect her because his father adopted her into the family. Apparently, protecting her also means having sex with her, or at the very least getting into some heavy petting.

As is the case with most standard harem anime, this story is full of tropes. You've got Mio, of course, who is a classic case of a tsundere character. And of course, there is the loli succubus. Truth be told, I actually like Maria more than Mio simply because she's different from other characters of her type. Most lolis in anime are tsundere. I don't know why this is, but that has been the standard since Familiar of Zero came out a while back, which was also upheld to the highest degree in Toradora. Maria breaks the mold by being different, and she actually gets some decent character development later on in the series. 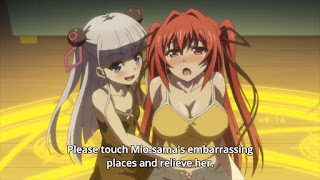 Overall, I feel like this story is about stereotypical of what I've come to expect from the harem genre. It has some upsides. Some downsides. I think there was a little too much pandering to fanservice and not enough character development. Basara feels like he could have been an awesome character, but because the animators spent so much time having him fondle Mio tits, his personality is very stale, like your typical harem hero/mary sue. This story will appeal to some people, namely those who don't necessarily care about plot and only want to see a pair of really large knockers put on display. I doubt, however, that people who want a deep, intricate and intense story will appreciate Shinmai Maou no Testament as much. 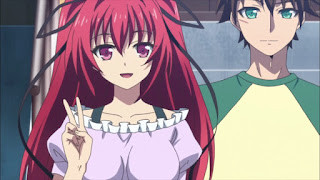