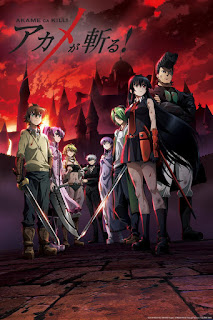 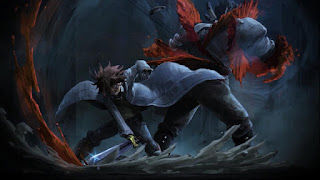 The first thing you should know about Akame ga Kiru is that it's a dark fantasy. This isn't one of those light-hearted anime where the good guys always win and evil is always beaten back. This is the anime good and evil are blurred, where corruption has set into the hearts and minds of the citizens. Which makes sense, as this anime is of the seinen demographic, which means it's an anime for college students and adults, not children 13 and up. 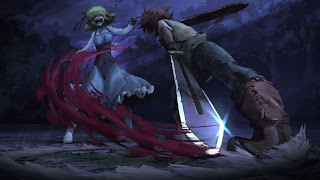 Set in a European fantasy setting akin to the renaissance period, Akame ga Kiru is about a young man called Tatsumi and his journey as he joins up with Night Raid, a group of assassins who have gathered together in order to fight against the corrupted empire.

Unfortunately, Tatsumi, for all his decent traits, isn't what I would call an amazing protagonist. While I like his enthusiasm and desire to become stronger, I feel like the anime never did his character justice. Everyone always talked about how much potential he had and how strong he could become, but I never really saw it. While I think he could have been an awesome protagonist, he never seemed to reach his full potential, and in the end, they had to Deus ex Machina him, because I guess he just wasn't strong enough under his own merits. 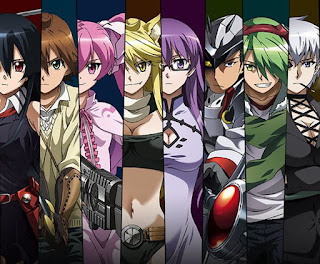 This anime features a fairly varied cast of protagonists. While Tatsumi is the main character, there are several others in here that I actually think are a thousand times better than him. My two personal favorites are probably Leone and Lubbock, but the others are well-conceived, too.

I think it's the support cast here that makes Akame ga Kiru worth watching. Tatsumi, for all his potential, isn't that interesting to watch, but seeing some of the other characters who support him makes not having a completely amazing main character a little better.

The only thing that really bothered me about the support cast was how some of them were killed off without being fully fleshed out. I feel like the director wanted to kill off the support characters for the shock factor, and also to make us feel the bleakness of their situation, but because some of the characters died before they truly had a chance for me to appreciate them, it didn't really have the same impact. And because they killed off so many characters in the beginning, the deaths that happened later on didn't have much of an impact either, because I was more or less expecting it. 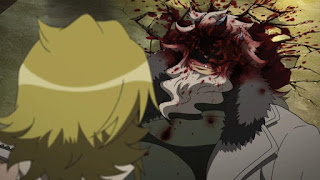 Like I mentioned before, Akame ga Kiru is a seinen anime, meaning it's for an older audience. It makes sense, then, that this anime is far more violent and gory than other anime such as Naruto, Bleach, and One Piece. While those are all violent and filled with action, this anime takes the gore factor up to a level that only a few before it have done. This doesn't just have the occasional arm getting lopped off. Sometimes a character might get bisected, their internal organs spilling to the ground. Other times they may have their heads bashed in, revealing brain matter and skull fragments. Again, I feel like this was done for the shock factor and to add some realism. While I myself am not a big purveyor of violence, I will admit that considering this is a dark fantasy, the realistic violence was well-suited here. 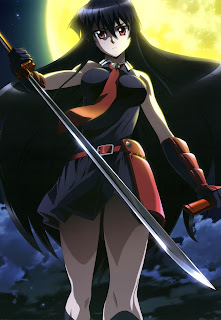