Volume 2 continues where volume 1 left off. Holo the Wisewolf is still traveling with Lawrence, and Hasekura accurately captures the charm of the original book by having the two continuously trading banters. Just like in the first volume, volume 2 retains its wit as Holo skillfully keeps ahead of Lawrence as far as dialogue goes, though I feel the young by comparison trader is starting to get a handle on how to deal with her. When I first started reading this, I had the distinct sense that Holo and Lawrence's relationship had progressed.

One thing that volume 2 doesn't quite manage to capture is the inherent loneliness that both Holo and Lawrence felt, which was the foundation of their decision to travel together. I honestly don't mind this that much, as I feel this shows that neither feel quite so alone anymore since they have each other, but I know others who didn't like that. This story tends to have a higher focus on a straightforward plot with clear-cut consequences and a just as clear solution, though that does not stop this book from being exciting.

This book also introduces a new character, Norah, a shepherdess of some skill. Meek and somewhat unsure of herself at first, she portrays a stark contrast to Holo in personality. I do not know if she will show up again in another volume, but I will admit that I did enjoy seeing a new character enter the picture, even if it's only temporarily.

Overall, I quite enjoyed this book. It was one of the few that I found hard to put down. If there was one thing that I feel didn't hold up, it was definitely the artwork. While certainly not bad, I feel like the illustrations are uninspiring and somewhat bland in comparison to the story. They just have that typical manga-esque and there's nothing that really makes the art stand out. Aside from that, this is definitely a story that I would highly recommend reading. 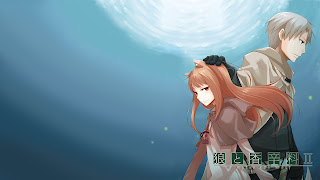 Posted by Unknown at 4:34 AM No comments: