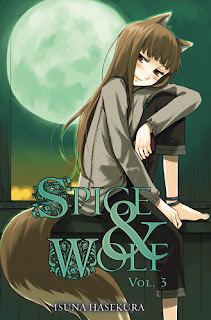 Color me impressed. Just when I thought the Spice&Wolf light novels couldn't get any better, I read this one and found myself blown away. There is a lot that I loved about this particular and not a whole lot that I didn't like.

Volume 3 starts off sometime after volume 2, obviously. Holo and Lawrence are traveling north, presumably to find Holo's hometown of Yoitsu. Right from the very start of this volume, we can already see how close the two of them are. Their banter is friendly yet witty, and Lawrence seems to have matured some, as shown by the ease at which he can return fire when Holo tries getting the better of him. Just after reading through the first few pages, I can feel the bond these two have.

It's not all fun and games, however, and like the past two volumes, this one has its share of danger--though not quite the same time as we've seen in volumes 1 and 2. While the danger in the previous two volumes was much more likely to end in death, bankruptcy, or both, this one is more than likely to have an even more bitter conclusion. The tension I felt as I read this volume was palpable from the moment things started going down hill for our heroes.

I think what I enjoyed the most about this volume was the sheer emotion being put into each scene. I felt like I could practically feel what Lawrence was feeling. His despair was my own. His desperation washed over me like a typhoon. Every time something happened to increase the tension, I felt like a string being drawn until I was ready to snap. This volume may have been a little shorter than the last two, but don't let that fool you. The tension and emotions put into this volume top the previous two by a wide margin.

This volume also had a higher focus on the relationship between Holo and Lawrence. More specifically, it focused on Lawrences feelings for Holo. During this volume, Lawrence was forced to reevaluate his relationship with the Wise Wolf of Yoitsu. We really get a glimpse inside of his mind and see his internal struggle. I also like this volume because we come to understand Lawrence a little better. Despite being experienced in mercantile and matters of economics, he is lacking in just about every other department, especially when it comes to relationships of any kind. This volume showed his flaws better than any of the previous ones, I feel, and it made him seem much more human. Even Holo got her moment to shine, a segment where you could really sympathize with her, which I felt made her seem less Sue-like and revealed the flaws that she has.

Overall, I felt this volume was quite possibly the best of the bunch. It was definitely my all-time favorite. 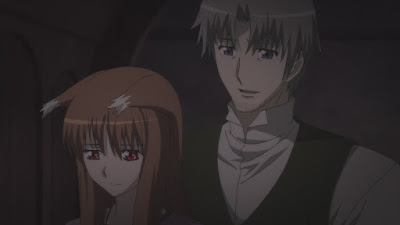 Posted by Unknown at 5:20 PM No comments: