Is It Wrong To Try To Pick up Girls in a Dungeon! Volume 1 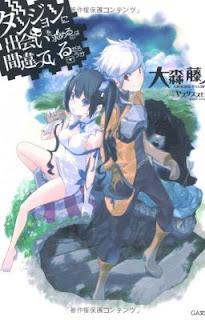 In Orario, fearless adventurers band together in search of fame and fortune within the monstrous underground labyrinth known as Dungeon.

But while riches and renown are incentive enough for most, Bell Cranel, would-be hero extraordinaire, has bigger plans.

He wants to pick up girls.

Is it wrong to face the perils of Dungeon alone, in a single-member guild blessed by a failed goddess? Maybe. Is it wrong to dream of playing hero to hapless maidens in Dungeon? Maybe not. After one misguided adventure, Bell quickly discovers that anything can happen in the labyrinth--even chance encounters with beautiful women. The only problem? He's the one who winds up the damsel in distress! 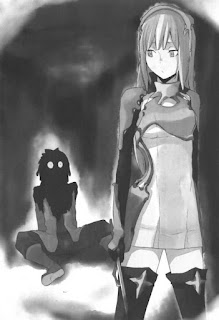 Having watched DanMachi the animated series, I knew that I had to read the light novels. While I thought the series itself wasn't the best anime ever, I still greatly enjoyed it and was positive that the light novel series would be even better.

While I wasn't necessarily disappointed with the first volume of Is It Wrong to Try to Pick up Girls in a Dungeon, I did feel a little let down. More on that later. Before I start talking about what I didn't like, I think it would be better if I told you about what I did like.

The first thing I like is the story itself. None of what I read here is new. You've got a boy who wants to become a hero but is something of an underdog, a beautiful girl that he falls in love with, and a fantasy world based on an MMORPG type of leveling system. I've seen this in anime and read this in books countless times. However, that doesn't make this any less enjoyable. I had fun reading this, just like I had fun reading every other story with a similar genre.

One areas where I feel the story itself shines the most is its side characters, and by side characters, I mean everyone who's name isn't Bell Cranel. The most notably interesting characters in this story are the female cast, which makes sense, as this is story follows typical harem tropes. The females characters that you meet in this story are all an interesting an eclectic bunch. Their personalities are fully fleshed out and they have their own goals and desires. Aside from their obvious infatuation with the main character, I quite like them. My favorite, by the way, is the Hestia, otherwise known as Loli Big Boobs by her fellow Gods and Goddesses.

Now, despite my back-handed insult to Bell Cranel, the main character of the story, I do not think he is a bad character. As far as harem protagonists go, there are definitely worse. I think what I enjoy most about Bell is his innocence. He's very childlike and innocent, despite his un-innocent desire to have a harem. This makes him more likable than most harem protagonists because he actually has a personality beyond "OH MY GOD, I JUST FELL INTO THIS WOMAN'S BOOBS!" which seems to be the personality most characters of this genre have. 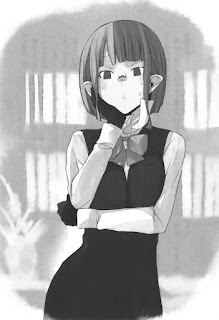 Good story and decent characters aside, I did have some problems with this light novel.

The first was the writing itself. Now, I'll admit that I don't read first person stories very often. I think the only books I've touched that are in first person is Highschool DxD, The Dresden Files, and the Percy Jackson series. That being said, those books, minus perhaps Highschool DxD, were a lot more fluid and smooth than DanMachi. From the moment I started reading this story, I found it difficult to keep going. The writing style is very stilted and awkward, making it more difficult to read. While I'm not grammar nazi, I also think more than half the sentences in this story were fragments, though this could just be my imagination playing tricks on me. Regardless, most of the sentences were very short and choppy, which meant that, throughout the entire story, I felt like my eyes were being put through a cheese grater.

Oddly enough, I think this might have been done on purpose. When I read the parts of this story that went into someone else's POV, the story flowed much more smoothly. I'm almost wondering if the author wrote Bell's POV in this choppy, fragmented manner as a means of letting us get more of a feel for Bell's personality and thought process. Granted, that is merely speculation, but I wouldn't know what to think if the strange and awkward writing was just a mistake that none of the editors noticed. 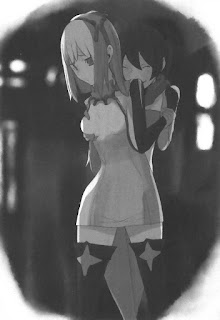 While the writing style threw me off, I did eventually get used to it. I still can't say I like it, but the story and characters were interesting enough to hold me through the end, and I will be reading the next volume.