Yamada-kun and the Seven Witches, Volume 2 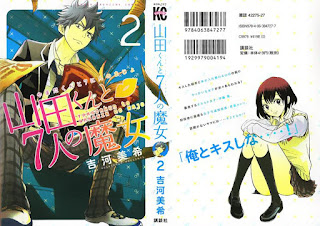 Volume 2 of Yamada-kun and the Seven Witches was every bit as enjoyable for me as the first volume. While volume 1 was a good introduction, I feel like the second volume brought a lot more to the table, as far as character development and introductions are concerned. 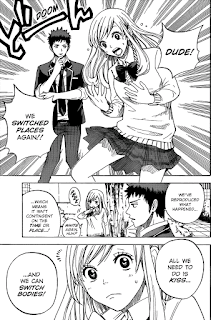 Continuing where volume 1 left off, volume 2 starts with Yamada and Shiraishi switching bodies. I guess they wanted to, um, learn more about his power - yes, that must be it. They weren't kissing because they wanted to. They just wanted to learn more about the body swapping ability. Once again, I feel like this is a really interesting concept. While I would never in a million years want to be stuck in a females body (I'm very attached to my male anatomy, thank you very much), I really enjoy seeing all of the zany situations that Yamada finds himself in while being trapped in Shiraishi's body. When you really take the time to think about it, this entire idea of body swapping is completely screwed up, but I think that's what makes it so fun. However, just because there's a lot of humorous situations doesn't mean it's all fun and games. There is a more serious side to this anime, though a good deal of the seriousness is overwhelmed by the comedy. I think what made this volume feel a little more serious were several instances where we get an inside look into some of our characters. 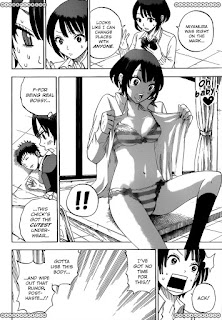 This volume does have a good deal of fanservice. Perhaps it's because this was written/illustrated by a women, but I don't feel like this particular brand of fanservice is terribly done. Quite the opposite, actually. The fanservice itself feels natural. I mean, let's face the facts gentlemen. If you were a guy who could swap bodies with anyone and suddenly switched bodies with a cute girl, what is one of the first things you would do after switching bodies with her? You don't need to answer that. I already know the answer even if you try to deny it. My point in all this is that the brief moments where something fanservic-y happens doesn't feel like a contrived plot device to show us more boobs, which is the problem I have with a lot of fan service manga. I mean, yeah, okay, I love To LOVE-Ru, but at least that manga doesn't deny it's perviness, and plays it up to the point where it's so ridiculous you can't help but laugh. This is one of the few manga in recent years I have read where the fanservice didn't make me cringe because it felt so out of place. 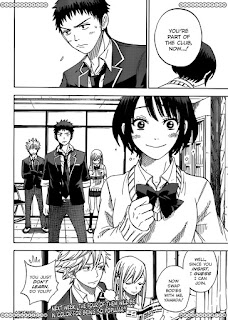 I also like the artwork. I know a lot of people who make mention of the art for Yamada-kun stating that it's alright but nothing special. I have to respectfully disagree. While I have seen better art before, I think the artwork here is actually very nice. It might have have excellent lines, the shading might not be the best, and it might be a little generic, but the character designs, the expressions they make, and even their posture, is all spot on. You can really tell who's who and what their personality is based on how they're drawn. Even when Yamada and Shiraishi switch places, its easy to figure out who they are from the drawings alone. While the artwork might not be incredible, the way the characters stand out based on how they are illustrated is noteworthy and deserving of praise.

Overall, I really enjoyed this volume of Yamada-kun and the Seven Witches, and am greatly looking forward to reading volume 3.
Posted by Unknown at 6:20 PM No comments: