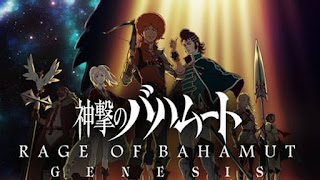 2014 saw a lot of great anime - and a lot of not-so-great anime. Fortunately for you, this particular anime happens to be the latter.

At first glance, Shingeki no Bahamut strikes you as just another swashbuckling anime without much going for it - then you see the most beautiful opening sequence ever, followed by a completely epic chase-slash-fight scene, and then you're hooked. It's face-paced, the story is fun and engaging, the fight scenes are awesome, and the characters are surprisingly memorable for an anime that only got a single season. This is a story that, despite having only been 12 episodes long, I thoroughly enjoyed from beginning to end. The only reason I didn't watch it all the way through in one go was because I had to wait for each episode to come out.

Story: The story is beautiful in its simplicity. It doesn't try to be convoluted by throwing in seemingly random plot twists that make no sense later on. It stays on a fairly straight and narrow path that slowly reveals more of the story over time. You learn at the very beginning what the story is going to be about - a giant dragon called Bahamut that was defeated when the gods and demons banded together, and then it goes on from there. I like how easy it was to follow. Yes, the story is a little generic (I know, another save the world anime), but the journey that the characters go through, their back-story and development, truly separated this story from all of the others.

Art: The artwork for this story is probably some of the best I've come across - right up there with anime such as Fate/Stay Night UBW, Nagi no Asukara and Noragami. I simply love the look and feel of the artwork, not just the characters, but also the backgrounds. The architecture has a very renaissance mixed with steampunk feel to it. Likewise, the characters are beautifully designed and seem to represent their personalities perfectly. The main characters are a little more elaborate than standard background characters, making them stand out all the more. They present a lovely, vibrant contrast to the people in the background and even the background designs themselves.

Sound: Now, I'm not too big on whether something sounds good or not, however, I'll be the first to admit that the sound, both the quality and the composition, were phenomenal in this anime. The first aspect that stands out in this anime is the opening theme song. It's metal. Brutal, heart pumping, bang your freaking head metal. And it sounds epic. Just listening to it gets me pumped up. Following this, the ending theme is slow and beautiful, like a gentle lullaby caressing the ear. The rest of the sounds are fine. Like I said, I'm not one to judge how something sounds, but the effects and vocals for the dialogue was all very clear and the quality was excellent. Nothing wrong there.

Characters: I think it's the characters where this anime truly shines the most. First off, you've got Favaro, a swashbuckling bounty hunter who is asked by Amira, a beautiful girl who acts kind of like a child, to take her to Helheim. The interaction between these two is absolutely hilarious. Favaro is a complete scoundrel, and I love that about him. He's not your typical shounen protagonist - he's also sporting a large Afro mullet - and that inherently makes him one of my favorites because he's so unique. Amira acts like a child who cares about nothing but drinking and eating, but she's got a goal and will stop at noting to attain that goal - and you later on discover the reason she acts so childish, so her personality makes sense. There are also two other characters worth noting, Kaiser and Rita. While not quite as interesting as Favaro, Kaiser plays a good foil for the main protagonist, the straitlaced and chivalrous knight who shares a past with Favaro. I enjoyed watching the way he and Favaro interacted throughout the anime, making you wonder about their relationship until their past is fully revealed. Rita is also a hoot, and I loved her sarcastic and deadpanned personality.

Overall, I enjoyed this anime a lot. It was fun to watch and I always waited eagerly for the next episode. When I went in, I expected an epic fantasy filled with sword fights and incredible battles, and I got just that.