it's the summer of 2015 and that means that a new season of anime has come out for us to enjoy. There was a lot to choose from, and unfortunately, due to things like work, writing, family life, etc., I only have a limited amount of time to watch anime. From the 54 anime that have come out this year, I've selected 6 anime to follow. These anime are the ones that I believe I would personally enjoy. Some of them may not be to your test, and if they're not, that's cool. If you have an anime that you want to suggest, you can always leave a comment at the bottom. 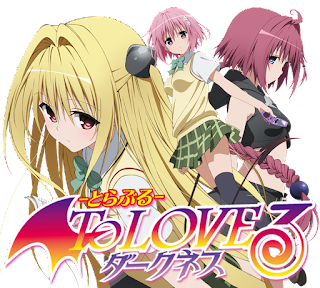 It should not come as any surprise that I've decided to watch this anime. When the first To LOVE-Ru came out, I fell in love. To LOVE-Ru was straight up stupidly perverted comedy, and it knew it. It didn't try to be anything else. It didn't try to give you this complex, deep and dark plot - because they knew it wouldn't have worked. When you've got a panty shot and boobs being shown every other scene, it's hard to take an anime seriously. This anime didn't try to take itself seriously, and that's what I liked about it. To LOVE-Ru Darkness, while still comedic, has a bit more plot and does have a little more seriousness to it. However, at it's heart, To LOVE-Ru is still a comedic anime filled with epic boob-falls and unusually erotic situations. 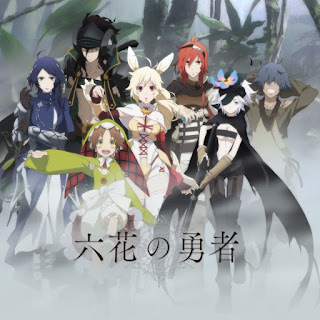 Rokka no Yuusha was a surprisingly interesting anime. It's a story about a monster called the Majin, which awakens every so many years, and six heroes who awaken to battle against the Majin. It's currently six episodes in and so far I have yet to be disappointed. The story seems to generally follow Adlet Mayer, the self-proclaimed "stronger man in the world" and Nashetania Loei Piena Augustra, a beautiful woman with flaxen hair who can create blades with magic. It's a story filled with plenty of action and adventure, and there seems to be some really interesting plot twists. I feel like, out of all the anime to have been released this season, Rokka no Yuusha is the one to watch out for. 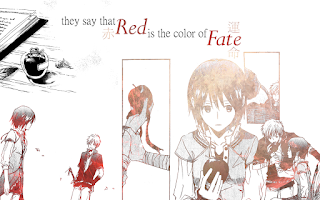 This has to be the cutest anime of the season. I remember watching the first episode for this anime and having a total fanboy moment. The story follows Shirayuki, a young woman who wants to follow her own path. During a trip to the woods, she meets Zen, a young man who appears to be hanging out with two of his friends. I was hooked on this form episode one. Shirayuki is one of the sweetest yet strongest female protagonists I've seen in a shojo anime - right up there with Yona from Akatsuki no Yona.

Made from the same studio that produced Clannad and Angel Beats, I knew that I would be watching this anime. So far, I haven't been disappointed. There's been a lot of development for the characters, and while it has comedy, it also has its share of serious moments that balance out the comedy. Given that this is being produced by Key, I expect there will be at least several character deaths and plenty of tragic moments. 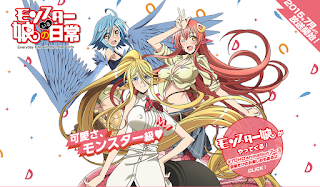 This is quite possibly the most interesting harem anime I've seen produced in a while. It's about a high school boy who's strong armed into being part of the student exchange program - except instead of having some foreign kid live with him, it's a monster girl - several monster girls. This is a very tropey anime. It has all of the tropes that I've come to expect from a harem comedy, with one sole exception. The characters, the women in the harem, they're all monsters, and they look like monsters. I've watched five episodes so far and haven't been disappointed.

Another interesting anime. Classroom crisis isn't what I usually watch, being the kind of person who has a preference for either action and adventure or romantic comedies. However, despite that, this has been an enjoyable show to watch. It's very sci-fi and while not the funniest show I've ever seen, it has its moments.
Posted by Unknown at 3:24 PM No comments: