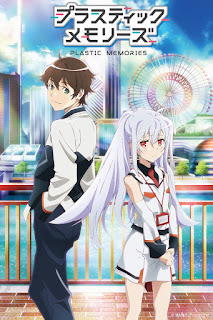 Before we begin, I just want all of you to know that, on the first episode of Plastic Memories, I cried like a little girl. Can you believe it? A full-grown man, bawling his eyes out like a little girl? I'd like to say I'm ashamed of myself, but the truth is, this anime just has that many feels. I believe that's why some people call it Plastic Feels instead of Plastic Memories.

Now then, take a good look at the gif to your left. That's what I was like during this scene. Tears streaming down my eyes and snot coming out of my nose. It was bad. I looked like a mess. However, it's just like I was telling you. This anime is full of feels. I swear to god, I am almost one-hundred percent positive the director making this anime was like, "so, what should we do to rip people's hearts from there chest in this episode?" Yet despite how heart rending many of the scenes were, I really did love this anime. The emotional scenes were emotional and never failed to bring tears, but they were also offset by some really nice humor that lessened the, "I just wanna curl up into a ball and cry." moments.

Like I stated before, this anime isn't all feels and tears. The humor is actually pretty damn funny. The main heroine in this story, Isla, is a Giftia, an android that possesses human emotions to the point where you'd never be able to tell them apart from a regular human - and she is an absolute riot. Seriously, some of the crap she pulls off in this anime makes me laugh my ass off. I remember watching her jump off a railing and belly flop into a trash can in one episode. I laughed so hard. Of course, the fun and games is also played up because of how heart breaking this anime is. Isla, especially, is a tragic character, in spite of all the humorous stunts she pulls. I think, for me, this is what makes me like her so much. She's funny, but at the same time, I really feel for her - because Isla is a Giftia, and Giftia only last for a total of 8 or so years before expiring. That's what this entire anime is about, and it's why the story is so tragic.

Tragic or not, there were some really touching scenes in this. I thought the romance between Tsukasa, the main character, and Isla, was downright adorable - incredibly funny and potential deadly for Tsukasa, but mostly adorable. Watching them muddle through their relationship, seeing Tsukasa try - and usually fail - to make Isla happy, really made it worth watching this anime. For those who enjoy watching a heartfelt romance with touching moments that are mired in beautiful tragedy - I'm looking at you Clannad fans - you'll definitely enjoy this. For those of you who don't like crying your eyes out, well, you probably won't want to touch this with a ten foot pole.

Story: While the anime is labeled as a sci-fi, the actual sci-fi itself isn't all that important beyond the idea of Giftia, the androids who can experience human emotions. Society in this anime has advanced to the point where they can literally create robots that replicate human emotions - these androids feel, think, act, and interact as if they were human. In many ways, they ARE human. However, this anime is also somewhat misleading. While there are a number of scenes that are heartrending, a good portion of this anime is light-hearted, funny, and deals with the awkward romance between Tsukasa and Isla. I didn't mind this so much, mostly because I don't think I could've dealt with too much heart break, but I know others who might be turned off by this. Also, while this wasn't a deal breaker for me, there is one thing about this anime that I didn't like and made much of the story feel a little contrived. If this wondrous, technological society is so damn advance, then why the hell do they not have a way to store a Giftia's memory and place it in a new body? This is the one sore point for the anime, and also an issue that makes the feels less feely than they could be. This wouldn't be much of a problem if they explained WHY a Giftia's memory couldn't be stored in some hardcore USB drive, but they don't, and because they don't, a part of my disbelief is suspended, which cheapens some of the really heart rending moments.

Artwork & Animation: I did enjoy the artwork in here. The art style is very bright and vivid, and there's a wide range of color palettes being used. Some of the character designs were a little bland, but a lot of the secondary characters are just archetypes and don't get much screen time, so I feel like I can forgive them. I do like Isla's design, but even I'll admit that she's a dead ringer for a long-haired version of Ayanami from Neon Evangelion.

Sound: I'd say about average. Honestly, there isn't anything inspiring about the sound, but the quality is nice and I didn't hear anything wrong with it.

Overall, I would say that this anime was nice, but it's not without it's flaws. I enjoyed it, but some others might feel it was too contrived. If you're looking for a decent romance with some light-hearted moments and also some tragedy, you'll probably like this.