Before I begin, can I just say that I freaking love the artwork for Log Horion? I seriously, seriously love it. Having read A Certain Magical Index and Spice&Wolf, Log Horizon is like a breath of fresh freaking air as far as artwork goes. Both of those other light novels have very bland and unoriginal art styles. I look at their illustrations and feel like they could belong to any light novel. Log Horizon's art is very distinctive. The thicker lines lend an interesting weight to the characters, and the dimensions themselves are rather pleasing. I also like the designs of each character. Truly, I artwork wise, I made a good choice to read this one. 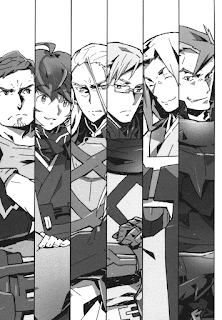 Fanboying aside, Log Horizon volume 2 really is a great addition to the series. Starting off almost immediately after the ending of volume 1, this particular volume deals with a surprising issue that I've never seen in a "trapped in a video game" novel/anime/manga whatever - the darkness that seeps into players hearts when they're left to live without a purpose. Unlike most RPGlit series, in this one, death is not the end, and since death is not the end, it means that characters here are left to toil in obscurity, with nothing to do day in and day out. It doesn't help that the food sucks monkey balls. As stated previously in volume 1, everything people try to make tastes like salty crackers.

However, fear not! Shiroe and his pals have decided to do something about the despicable lack of good food and drink - and they also plan on helping Akiba regain it's previous luster before Elder Tales became their reality, but I think they're mostly in it for the food and drink. 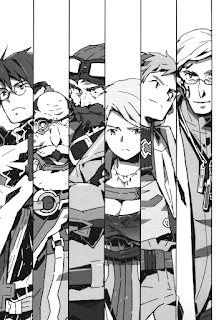 I'm sure you'll all remember how, in volume 1, Nyanta, the swashbuckling cat man who adds "mew" to all of his sentences, found a way to make food taste like food. He did this by disregarding the Elder Tales gaming mechanics and cooked food the normal way, as in the, he cooked the way someone in real life would cook. This led to the miraculous discovery of real food.

Being the smart guy that he is, Shiroe decides to use this new knowledge in order to better Akiba's atmosphere. He does this by having the Crescent Moon Guild open up a hamburger joint - yes, a hamburger joint. I know that sounds kind of weird, but trust me, when you go months eating what amounts to soggy rice crackers, eating a hamburger that actually tastes like a freaking hamburger is heaven on the taste buds. Lo and behold, it does help revitalize Akiba's inhabitants. Shiroe doesn't stop there, however. Oh no. A hamburger joint is not nearly enough to fix Akiba's situation. It's a start, but he plans on doing so much more. What does he do? Heh, not telling. 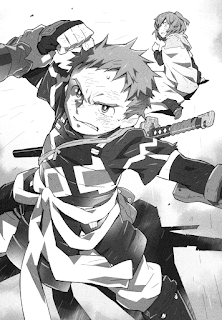 Just like in the previous book, Log Horizon is very enjoyable. While the previous book does a lot of world building, this one deals more with philosophy and politics. Now, I usually hate politics. Why? Because politicians suck. They're a bunch of lying, deceitful little shi - ahem, anyway, my dislike for politics aside, I actually found the politics used here intriguing. It's interesting to read about characters negotiating mercantile rights, or debating what to do about the tense atmosphere in Akiba. I found it truly delightful to read about.

This volume also introduces a lot of new faces. In book one, we were introduced to Shiroe, Akatsuki, Naotsugu, Nyanta, Marielle, Henrietta, and Serara. This volume features nearly a dozen more characters, and each one seems fairly interesting. We weren't given much of a glimpse into these characters, but I feel like we will in later volumes.

I think what I liked the most about this volume wasn't its many characters, but Shiroe coming into his own. I remember in volume 1, Naotsugu said he was a "Machiavelli with glasses," which I take to mean he appears to be a rather unscrupulous individual. Well, in this volume, I think unscrupulous is the kindest word you can use to describe him. Shiroe is truly in fine form in this volume, and I love how freaking awesome he was to read about. I think he might honestly be one of my all-time favorite book characters.

Overall, I felt this was a great second volume that was even better than the first. I enjoyed it immensely and hope the next volume will be even better.
Posted by Unknown at 7:58 AM No comments: