Problem Children From Another World Are Coming, Aren't They 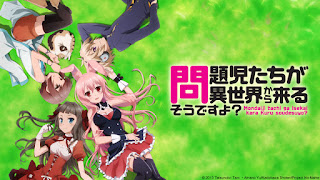 Problem Children From Another World Are Coming, Aren't They? is an enjoyable anime that's surprisingly short, despite it's long title. Speaking of, I really do have to gripe about these ridiculous titles that the Japanese conceive. Seriously, why are all of their recent titles so freaking long? These aren't even titles anymore, they're entire sentences!

Story: The story itself starts off kind of cliched. Children from another world are basically summoned by a chick with bunny ears to participate in what's known as Gift Games within a world called Little Garden. While the premise is pretty stereotypical, I like how they were actually summoned for a reason - even if helping a community that's barely keeping itself together is, in itself, a cliche. While I've seen this done plenty of times, I will admit that I have seen pretty much everything there is to see out of the entertainment industry, so watching a story get re-ashed in this manner doesn't really bother me all that much.

Characters: The characters themselves are interesting, but some of them are kind of bland at the same time. It's hard to explain. I genuinely like the characters in it, but I can see the archetypes they're made from. Izayoi is your typical bad boy who's gotten bored with life and wants to have fun, Asuka is a rich girl who's gotten bored with life and wants to free, You (Yes, that is her name) is a lonely girl who's gotten bored with her life and wants to make friends, and Black Rabbit is your typical fanservice girl complete with big breasts and bunny ears. These aren't really "deep" characters, when you think about it. In fact, they seem fairly one-dimensional at times. However, I think there's charm in the simplicity of these characters. While none of them will win any "Character of the Year" awards, I enjoyed watching the chaos they caused and laughed during some of the scenes.

Sound: While this isn't something that I'm big on, I can say that the sound quality was nice. There wasn't anything overtly wrong with it, and both the subbed and dubbed version had some decent voice acting. I actually liked some of the dubbed actors better than the subbed ones in this. I don't know the name of the guy who played Izayoi, but he really is a good VO. While some people sound like they're just reading lines from a script, his voice actually has emotion in it, which is important in voice acting and something that a lot of anime voice actors seem to fail at.

Art: The artwork here is nice, but uninspired. Having only been created within the last five years or so, this is a relatively new anime, and it generally follows an art style that is similar to most other new anime out there. The characters are vibrant and colorful, the backgrounds are well-drawn and contrast nicely with the characters, and the designs are fairly nice. However, while the artwork isn't bad, there is nothing here that makes it stand out from the other anime I've seen.

Animations: While the animation is smooth and fluid, there is only so much "I'm so cool look at how my air rustles in the wind" that I can stand. One thing this anime has a lot of is Hair Rustling. You've probably seen this before, even if you haven't heard of it. This is when a strong wind kicks up around the main character, whose hair suddenly waves about fiercely while Mr. or Ms. MC smirks a smug little smirk. There is a lot of that here, and it got kind of annoying at times. Despite my complaint, the animation is still nice and all of the characters were on model during the action sequences, which is more than I can say for some anime.

On a whole, I think this anime was interesting. If they ever came up with a second season, then I would probably watch it. I may even watch season 1 again if the mood takes me. However, while I enjoyed the anime personally, I can also unequivocally state that this anime is not without its flaws.