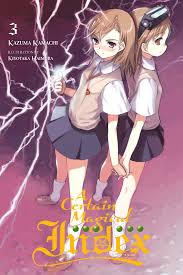 While I enjoyed the other two volumes of A Certain Magical Index, I have to say that I think volume 3 is definitely the best one so far. The story is deeper, the plot is darker, and the struggle that both Touma Kamijou and Mikoto Misaka undergo feels a lot more intense and real. Thus far, I feel like volumes 1 & 2 were a glimpse into this world, but very shonen in their execution: bad guys appear, good guy defeats bad guy, bad guy is no longer bad. That sort of thing. 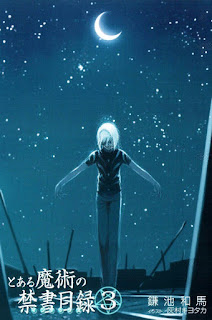 This particular volume introduces the sisters to us - no, not that kind of sister. We've already met Index, the nun that Toma lets freeload at his home. I mean Misaka's sisters, all 20,000 of them... wait, what? That's probably what you're thinking right. 20,000 is a lot, so having 20,000 sisters is insane. Her mom must have been popping at least twelve kids out each day since she was, what? Sixteen?

Before you let your mind fall into the gutter, these aren't those kind of sisters either. I'm not gonna tell you what kind of sisters they are, though. I'm not one for giving out spoilers like that. If you wanna find more out, then you can read the book.

20,000 sisters aside, I felt like this novel had a lot more depth than the last one, which is understandable, since the last one felt like just about every other shonen-esque story out there. It was also all about Toma, and since he is the epitome of a shonen hero, it's hard to have a story that doesn't feel cliched. This one is more about Misaka and her struggle, even though Toma is still the main character, and because it features the struggle that she goes through, we're given a much deeper and more meaningful story here. It was truly a pleasure to read this volume. 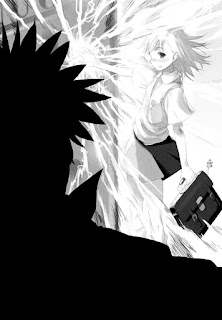 My only real complaint is with the artist who illustrated this series. I haven't mentioned it yet, but I almost feel like the artist has a really skewed level of skill. Sometimes it seems like Kyotaka Haimura has really strong illustrations, while other times I wonder if he's just a lazy hack. Almost half of his illustrations look like they were half-finished, while the other half were really good. It really bothered me to see artwork that made me wonder if someone had started something, then decided it was good to go halfway through. I don't know. Call me picky, but I would have preferred at least uniform level of artistic talent all the way through. Heck! I wouldn't have been bothered as much if all of his drawings sucked rather than just a few of them. At least then it wouldn't be so jarring.

Strange artwork aside, I really did enjoy this story. It had a lot going for it, and I felt a lot more emotionally connected to the characters here. I'm looking forward to reading volume two when it comes out.
Posted by Unknown at 3:56 PM No comments: