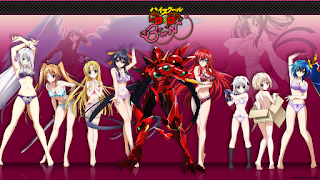 I'm sure all of you are going to be surprised to hear this, but I didn't really like season 3 of what has, for the past two seasons, been my favorite ecchi/harem anime. Now, I know what you're going to say, "But Brandon, Highschool DxD is one of your favorites! How could you not like an anime that has so many tits?!" The honest to god truth is that I don't watch Highschool DxD because it has boobs. I watched it because I love the light novels, and I wanted to see how the light novels would be adapted into an anime. Seasons 1 & 2 were a blast to watch. While they weren't 100 percent accurate to the novels, they very close. Season 3... not so much.

The biggest issue I have with season 3 is the number of extremely important moments that were cut out. For example, those of you who've only watched the anime will never know that the Gremory group didn't just go to the underworld because, "Hey! Let's go see Rias's family and fight an evil Norse god!" No, they went to the underworld in order to attend the Young Devils Gathering, which is where a series of Rating Games took place between devils around the same age as Rias. In fact, the entire second half of volume 5 is pretty much dedicated to a Rating Game between the Gremory Peerage and the Sitri Peerage. In other words, Rias vs. Sona. That didn't happen in the anime, however, and since the young devils gathering is what I was looking forward to the most, not seeing it really bummed me out.

What's more, they completely screwed up the entire timeline. Volume 7, Ragnarok After School, is when Loki, the Norse God of trickery, plays the part of the antagonist. Volume 6 is when Diadora Astorath kidnaps Asia. So, not only did they completely screw with the timeline, but they did so in such a way that a lot of what happens feels jumbled and half-assed. There was simply way too much cut out, and the order of events was all screwed up, leaving me unable to enjoy this season as I had the last two seasons. It doesn't help that, because they cut out so much plot in order to compress 3 books into a 12 episode season, a lot of the plot and sidestory is never really explained. For example: Issei becoming the Oppai Dragon. The reason he became the Oppai Dragon is because, during the rating game with Sona's peerage, which was broadcast on live TV in the underworld, he said oppai a lot and the kids took a shine to that word. In the anime, they make up some lame excuse of, "Oh, even though this was a crises and we didn't have time to set up a camera, we still somehow managed to film you during your fight with Loki." It was complete garbage. Absolute bull S*&t. It's like they tried adding only half of the relevant plot information that you need, then cut out the other half - which just so happened to be more important than what they DID show - and expected you to follow along. It really pissed me off.

So, outside of my complaints about how much of the plot they butchered, I have other problems. The animation, for one. While the artwork is still awesome, there's a lot of issues with the animation. One of my biggest problems is how enemies during massive battle scenes never freaking move! Seriously, I remember this one scene where Rossweisse was launching beams from her hands, and none of her enemies even attempted to dodge! They just stood there and let themselves be killed! It was so stupid! What kind of enemy stands around waiting to be killed? I know that anime have a budget, and that they're also on time constraints, but Highschool DxD is popular. They should have had more than enough money to not skimp out on their animation quality like this, especially with all of the new 3D animating techniques that are being used in anime today.

My complaints about the animation quality aside, everything else was good. The artwork hasn't suffered, the ecchi scenes are still, well, filled with Massive Plot - unless the scene features Koneko or Asia - and the character development, while half-assed, does try to accurately depict the changes that Issei and the others undergo. I still didn't like this season as much as I did the last two, but I don't think it was super awful. I only pray that, if this does get a season four, then they do a better job of keeping the anime canonically accurate to the light novels. At the very least, they shouldn't skimp on important scenes. If they can't compress 3 volumes into a single season, then they should stick with just two.