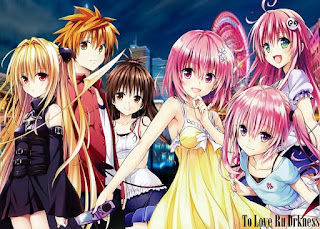 Come one, come all, to the ecchiest freaking anime on the planet. Fill your eyes with big bouncing bazangas and jumbo jiggly joggers. Yes, this is the most boobalicious anime you're ever going to watch. And unless you despise ecchi and the harem genre, I guarantee that you'll love this.

To LOVE Ru Darkness is the anime that knows exactly what it is and doesn't try to hide it, nor are they ashamed to show it. This anime is like a train wreck of perversion. A part of you wants to look away, yet the rest of you forces your eyes to remain glued to the screen. In fact, despite my own shamelessness, some small part of me is actually ashamed to admit that this is one of my favorite anime of all time. The humor in this anime is hilarious and raunchy beyond compare. Every episode is filled to the brim with salacious gags filled with so much eroticism that erotica writers everywhere would cum if they watched this. Actually, I'm pretty sure the dudes who produced this were jacking off during the making of this anime.

Artwork: If there is one thing that To LOVE Ru does right, it is definitely their artwork. The artwork here is beautiful and, while it should come as no surprise, the females in this are absolutely gorgeous. These guys really know how to draw female characters to make them as physically pleasing to the eye as possible. Not only is each member of the female caste ridiculously beautiful, but the animators know exactly how to draw them to make them look as erotic as possible. A part of me really does have to applaud the audacity these people had when they made this, and also the genius of their perverted minds. Truly, Jiraiya of the Sannin would have cried tears were he not a fictional character.

Animation: Much like the artwork, the animation in this series is surprisingly spot on. You'd think that an anime whose entire plot is based around giving the main character a harem would mean the animation would be half-assed, right? Wrong. The animations here are beautiful, and perverted. Seriously. I'm not joking around here. Pretty much every scene in this anime is an excuse for something perverse to happen to one or more members of the female caste. In any event, while pretty much every scene is filled to bursting with something lecherous going on, they are beautifully animated. The animations are fluid, the characters are in model, and the scenes are like something out of a teenage boy's wet dream.

Story: Unlike the first season of To LOVE Ru, Darkness actually does have a plot. Sure, most of the plot is masked by the massive amounts of Plot, but it is there, though part of me suspects the plot is really just there to deliver us more Plot, if you know what I mean. Wink. Wink. Nudge. Nudge. What is the plot? Well, basically, the story is about Rito Yuuki and his harem, and it's about how he gets that harem. It's also about Momo Viela Deviluke, one of the princess to the planet Deviluke, and how she is helping Rito get the harem he never wanted with her so-called Harem Plan. Yes, one of the main female characters is trying to give Rito his very own harem. What can I say? She's a perv.

Characters: To LOVE Ru Darkness features a wide caste of characters. You've got Rito Yuuki, of course, who is the Emperor of Boob Falls. You've also got Lala Deviluke, the cheerful genius and first princess to the planet Deviluke. Momo and Nana Deviluke, her sisters, are also present and so many more. Most of the characters are firmly set into specific archetypes. A good example is Kotegawa Yui, a classmate of Rito's, who has been firmly placed within the category of tsundere. While I normally dislike characters who are all trope and no development, Kotegawa actually makes it work. I think it has something to do with the over-the-top perverted things that happen to her. Seriously, if I was her, and I had some dude crash into me and either grope my tits or land with their face in my crotch, I'd go tsundere, too.

Two new characters are introduced to this story. Mae Kurosaki. No, she is not related to Ichigo Kurosaki. This isn't a crossover. Mae is actually Konjiki no Yami's little sister, another sentient weapon with the transphase ability, which allows her to turn any part of her body into a weapon, though she seems to prefer turning her hair into swords. Unlike Yami, who claims to hate ecchi, Mae seems to love it. In fact, I sometimes feel like her entire life goal is to get Rito to lick her all over her body. She really seems to enjoy perverted situations, which is funny because her best friend happens to be Nana Deviluke, the tsun-loli of this anime.

Tearju Lunatique is another character that's introduced during Darkness. She's a scientist and the creator of Yami, who is based on her DNA. You can actually tell the two are related in some way because they look almost identical. Taerju seems to be the definition of a klutzy genius. She can't seem to do anything outside of science-y stuff. I would even go so far as to say she's a failure at life, but that sort of adds a charm to her. I actually feel for the woman. She came to Earth so she could be with Yami, but Yami doesn't want anything to do with her. Her klutziness is also adorable. Also, and perhaps this is not so surprising, but Taerju's boobs are massive. They're huge. Ginormous even.

If there was one thing about this anime that I did not like, then I would have to say it's the lack of Lala. In the original To LOVE Ru and Motto To LOVE Ru, Lala was one of the main characters. In Darkness, Lala has taken a back seat for characters like Momo and Yami. While I know that a lot of men like Momo because of her Harem Plan idea, I've always preferred Lala. Her cheerful personality and the many inventions she's made, none of which ever worked the way she wants them to, was what really sold me on the original series. While Darkness does have some scenes with her in it, and you even learn more about Lala's past and how kind she can be, I really wish we got to see more of her.