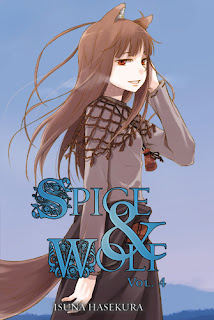 To be perfectly honest, I didn't enjoy Spice&Wolf volume 4 as much as I did volume 3. While the writing hasn't suffered, and the story is still pleasant, I feel like the last volume had a lot more going for than this one did. Perhaps I was simply expecting more out of the story, or maybe I was hoping for a bigger plot with higher stakes, since every volume before this had high stakes and risks involved. While I wasn't disappointed to read the next saga in Lawrence and Holo's adventures, and I still enjoyed it, I found myself enjoying it a little less than I expected.

This particular volume is about Lawrence and Holo journeying to Tereo in the hopes of uncovering information about Yoitsu, Holo's homeland, and its ultimate fate. There isn't really much more to say, honestly. Without giving any spoilers away, I can say that while this story was still entertaining, it lacked the sense of urgency that the other three novels have had. While this doesn't necessarily make it a bad story, and I can appreciate a good break from the constant danger they've been facing, I still wish that something more interesting had happened. This entire book was basically Lawrence and Holo getting involved in the affairs of a town they hold no allegiance to.

I think my biggest problem was that there really weren't any major issues here. In the last novel, Lawrence and Holo had this huge fight, which caused them to separate for the last half of the book. In it, you could feel Lawrence's loneliness and desperation to get Holo back. Even if, at the end, Holo had been on his side all along, the way it was written had me on the edge of my seat throughout the entire story. I couldn't put it down. Not so much with this one, though. While I still read this quickly enough, I didn't feel this insane desire to keep flipping pages. I think my problem stems from how I read volume 3 before this. I'm pretty sure that if I hadn't read volume 3 before this one, I would have liked it a lot more. It was kind of calm, and the story was clean and interesting, and Holo and Lawrence have grown really close, which I like. However, compared to the previous volume, this one felt just a little lackluster.
Posted by Unknown at 6:12 PM No comments: