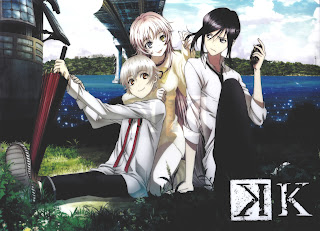 I have a confession to make: I have fallen in love. Yes, love. I've fallen in love with an anime called K-Project. This anime did almost everything right. It's one of the few that I've found myself enjoying so completely that I watched the entire 12 episode season in a few days - and one of the few anime that I became disappointed to see end.

Story: The story is about a young man named Isana Yashiro, who supposedly murdered a member of a gang called Homra, and now several different people are after him. This 12 episode series follows his journey as he tries to prove his innocence, discover the real killer, and learn more about himself in the process. Despite how that makes it sound like some kind of mystery series, I can assure that it's not - not fully, at least. If I had to call this series anything, I'd say it's a mixture of action, comedy, and drama with a little bit of mystery mixed in. It's also a very intelligent series, with a complex storyline and a good deal of well-developed characters.

Artwork: The artwork in K-Project is absolutely gorgeous. Truly top tier. In all honesty, I think the artwork in this anime is better than almost any other anime out there. All of the characters are well-designed, and the backgrounds are just stunning. I don't think I've ever seen backgrounds that were so beautiful before. All of the characters also stand out quite well. The color pallet used for the characters creates a differentiation between background, main characters, and side characters. Furthermore, the use of 2D and 3D artwork is done rather seamlessly. I can tell they used 3D art in here, but it's done in such a way that you don't notice unless you really know what to look for.

Animation: This is probably one of the few anime whose animation is almost completely without flaw. Throughout the entire season, I didn't find any of the mistakes that most animations tend to have. It was fluid and the transitions were smooth. What's more, all of the fight scenes were beyond amazing. I've watched a lot of anime with action in them, and very few can keep the same level of fluidity in their action scenes that they do in a normal scene where there isn't much going on. This one does that, and it does that well.

Characters: One thing I truly loved about this anime definitely has to be its characters. All of the characters are well-done, fully-fleshed out, and have unique personalities, which is really quite amazing, considering how many characters this anime has. The three main characters, Isana Yashiro, Neko, and Kuro are all well-crafted. Yashiro acts like a lazy high school student who just wants to enjoy life, and yet you can tell that there is a lot more to him, even at first glance. There's a lot of mystery surrounding him. And, of course, there is Neko, the mysteriously beautiful girl who can turn into a cat. We don't know much about her backstory, but she has such a vibrant personality that we don't really need to. I loved watching her and seeing all the things she did. Kuro plays the straight man in this group. If Yashiro is lazy and Neko a glutton with little common sense, then Kuro is the one who keeps both of them from doing something stupid. Watching the three of them was a pleasure because every scene they had was interesting. Of course, there are many other characters, and each of them is unique and feels real.

Also, can I just say that I ship this pairing so freaking hard? I do. NekoxShiro has officially become one of my favorite pairings of all time. In fact, if there is one thing that I was disappointed in with this anime, it's that these two never got together. I feel like these two were made for each other. Yashiro acts like a lazy young man whose kind of reckless and just likes to go with the flow, while Neko is a fun-loving girl who is completely devoted to him. I'm going to be honest, if these two don't get together in season 2, which comes out this October, I am gonna be so pissed off - so, so, so pissed off. I want to see them kiss so badly, and I really hope the animators make that happen. If not, I'm going to write a very strongly worded letter about how they've ruined my life by giving me such a cute couple and not going anywhere with it.

Sound: I normally don't have a whole lot to say about sound quality, but I have to admit that it was really something here. First off, the opening theme song is beautiful, just beautiful. I absolutely loved it. The music has a rockish feel mixed with opera vocals. It was very provocative, and the ending theme song was also gorgeous. The sound effects were all nice to, and I loved the voice acting, both from the dubs and the subs. In fact, I think the English dubbing was even better than the subtitled version this time. The voice actors who played these characters in English really knew how to put emotion into their voice. It was quite good. 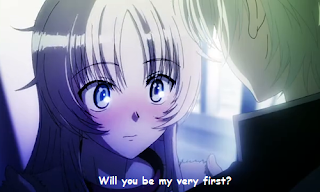