GATE: The JDSF Fought There 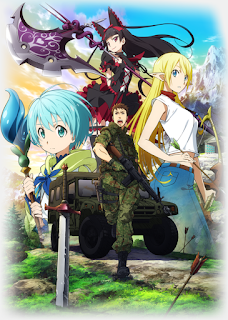 GATE: The JDSF Fought There is probably the most interesting anime I've seen in a while. The basic concept is this: A large gate appears in Japan, from which numerous warriors and fantasy creatures pour forth, invading our world and wreaking havoc on Tokyo. Through it all, one middle-aged Otaku nut, who just so happens to be in the military, is caught up in this battle and, through a lot of unfortunate mishaps, ends up becoming a hero. He and several other members of the JDSF are then sent through the gate to investigate the other side, where they come upon a fantasy world straight out of Lord of the Rings.

There were two things I enjoyed about this anime. The first is the concept. While the "other world" idea has been used plenty of times before, I've usually only seen in done on a smaller scale. In GATE, EVERYONE knows about the other world. It's broadcast on live TV, so pretty much the entire world knows that there is a gate in Japan, and that this gate leads to another world. This is like taking a concept and cranking the audacity levels to well past 9,000. 9,001? Anyway, I thought the idea for the anime was very well executed, and I like how this didn't fall back on the "Let's hide the existence of fantasy creatures from the world for so and so plot reasons."

The other aspect I appreciate the most was GATE's myriad of characters. Itami, the main character, was particularly refreshing. He's an Otaku, meaning he's someone who's so obsessed with anime and manga that he would generally be disregarded as a loser, however, he also happens to be a member of the JDSF, and is honestly kind of a badass. I really liked how it portrayed a healthy side of Otaku culture, showing that not everybody who loves collecting anime, manga, and other paraphernalia is a social shut in that refuses to leave their home. Itami is relatively sociable, and even though he has his moments, he functions just like every other member in society.

Outside of Itami, three other characters stood out the most. Tuka Luna Marceau,  Lelei La Lalena, and Rory Mercury. These three are girls that Itami and company encounters beyond the GATE, in the other world, and each one has a unique personality and their own issues. Rory is an immortal stuck in a 13-year-old body. She seems to be a favorite, which I guess is because she has such a strong presence and is the most active member of the trio. She's also very violent, which makes sense, as she is a demigoddess and the apostle for Emroy, a god of war. Tuka is my personal favorite. No, it's not because she's a hot elf girl.... don't look at me like that! Anyway, she is the one we see the least of, though I hope that will eventually change. Her personality is that of a normally optimistic and cheerfull 17-year-old girl... even though she's actually 165. Hey, it's better than Rory's 961 years of age. The last of this Trio is Lelei, a sage and sorceress. She is the only human among the three, yet she is very talented and extremely intelligent, capable of grasping the Japanese language within a very short time.

Like most anime, this has its moments of fanservice. Rory seems to have be this anime's fanservice girl. I sorta wish they'd had more Tuka, but whatever. The fanservice can, at times, be a little awkward, but it can also be quite funny. I do think they could have, if not toned down the fanservice, then at least given us a bit more development with the characters. The only one we really see a lot of is Rory. I would've enjoyed learning more about Tuka and Lelei, though Lelei's past history seems to be the least interesting, perhaps because she's only 15-years-old. Regardless, I did enjoy most of the moments in here, fanservicy scenes included.

Animation wise, I do believe this is one of the better animated series. Then again, I feel like a lot of animations are becoming smoother due to the use of CGI. Regardless, the animation in this anime is very fluid and generally seamless. I especially enjoyed the action scenes, which were always a blast to watch - and no, it wasn't because of the loli kicking ass with a giant scythe. Overall, I feel like the animation was only secondary to the story and characters, which are what really drove this anime home for me. I can watch an anime with only okay animation, but I can't watch an anime where the character's are a bunch of dull caricatures of stereotypical archetypes.