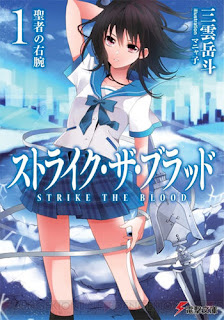 All powerful vampires who go to high school? Cute sword shaman middle school girls? Yes, Strike the Blood does have that. The story of Akatsuki Koujou, a regular teenager in high school, who just so happens to be the Fourth Primogenitor, the most powerful vampire to have ever existed, and Yukina Himeragi, a magical sword shaman wielding a powerful spear, assigned to watch over him.

I found Strike the Blood volume 1 to be a cute series that is entertaining, but doesn't offer much in the way of originality. It is very stereotypical of its genre, from the overpowered main character who, because he wants to live a normal life, doesn't have full control of his powers, to the cute girl who's assigned to kill him if he proves dangerous. Let's be honest here, if you're going to have someone watch over a super-powered vampire, you're not going to send a 14-year-old middle school girl to do it. You're just not. That's like practically asking the vampire to suck her dry - and my suck her dry, I mean suck her blood, ya pervs.

While I complain about the cute middle schooler being assigned to the high school vampire, I did enjoy the relationship they built. Having watched the anime before reading this, I can say that I feel like the light novel does a better job of conveying how they become friends. In the story, it's quite clear that they develop feelings of camaraderie for each other during volume 1. Their interactions, while lacking the wit and panache of Holo and Lawrence of Spice and Wolf, does have a refreshing feel about it. It's something that I feel like I can see happening in a regular high school - minus the vampire/magical girl aspect. The story itself reads very much like a slice-of-life with some major action going on. Like most light novels, this story has both a standalone plot that becomes solved by the end of the book, and an overarching plot that makes it obvious there will be more volumes on the way.

One of my favorite aspects about this are the monsters. I've seen vampires and werewolves and demons done before. They've been done to death, after all. However, this series takes a slightly different approach. First, everybody knows about the various monsters in this world. Everybody. It's common knowledge. Second, the place where Koujou lives is the Demon District of Itogami City - a man-made island off the coast of Japan. Here, humans and demons live in harmony... well, mostly harmony. There are some people who cause problems, like, hitting on a middle school girl, but most are nice folks. I also quite liked the magic they used. While the magic isn't explained perfectly, I feel like this grants them more leeway because it leaves a sense of mysticism, and besides, the Beast Vassal idea - a creature born of a vampire's pure magic - is pretty cool.

While this wasn't an amazing book, and the writing was a little repetitive, I did enjoy it. This will be one of the series that Yen Press has been translating that I will be following.
Posted by Unknown at 6:34 PM No comments: