Rather than my usual anime review, this weekend, we're going to be taking a look at the two most generic anime to have come out this Fall. Yes, I am talking about The Asterisk War and Chivalry of a Failed Knight. 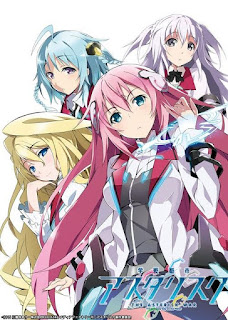 Invertia… an unprecedented disaster that struck the world during the 20th century. Because of this disaster, numerous cities around the world were destroyed. However, within the meteor, an unknown element called mana was discovered, which allowed human technology to make rapid strides. This also gave rise to a new species of human born with unique skills – the Star Pulse Generation. The setting for the world’s greatest comprehensive battle spectacle, the Festas, is an academy city above the water surrounded by six academies called Rikka also commonly known as Asterisk. 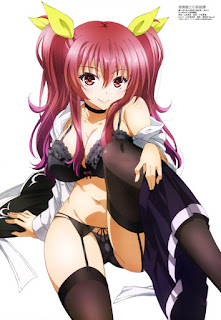 For Ikki Kurogane, graduating as a Magical Knight is nigh impossible. Among Blazers, he’s considered the worst; he can materialize his soul into a weapon, but his magical power is extremely low. To add insult to injury, an unfortunate encounter with the talented and beautiful Princess Stella Vermillion slashes his already slim odds and alters the course of his life forever.

Now, let us take a look at these two anime and see why, at first glance, they appear almost like carbon copies of each other.

What makes these two anime the same:

Watching these two anime back to back, you'll see that within the first episode, they don't really do much to differentiate themselves from each other. In fact, I almost thought that, aside from the artwork, there were no differences. At least, none that could be discerned right away - both main love interests even have the exact same power over fire. Truth be told, there actually are a few differences, but you don't learn about most of them until episode 2.

What makes these two anime different?

There honestly aren't that many differences right now, however, there are some that I felt were noteworthy.

First is the Main Character's reason for being at school. In The Asterisk Wars, Ayato's reason for going to school is to, and I quote, "To find out what he's supposed to do." Really? Freaking seriously? That is the dumbest reason for a plot that I have ever seen! What the heck does that even mean? Unlike The Asterisk Wars, Ikki's reason for going to school is much better: He's a failure with little magical power who wants to become a Magical Knight (later on, we learn that he's trying to emulate his grandfather, who he looks up to). Ikki also has the underdog appeal.

The Asterisk Wars: 0. Chivalry of a Failed Knight: 1

The second most obvious difference is the art and animation. I'll be honest, The Asterisk Wars has Chivalry of a Failed Knight beat here. While I don't dislike the artwork in CFK, I feel like the art in Asterisk Wars is cleaner and the animations are smoother.

The Asterisk Wars: 1. Chivalry of a Failed Knight: 1

Next is the main character. Ikki versus Ayato, and Julius versus Stella. Now, quite frankly, I like Ikki better than Ayato, and the reason is simple. In episode one when Ikki walked in on Stella while she was in her underwear, he decided to strip, too, so she wouldn't be embarrassed. I thought that was awesome. Seriously. Most main protagonists respond the way Ayato did. Not Ikki, though. He's like, "I know how this looks, and I won't make an excuse for seeing you naked, so how about I strip, too!" As far as character personalities go, Ikki has Ayato beat.

What about Julius and Stella? Well, lets take a look at how these episodes end. By the end of episode one in Asterisk Wars, Julius is still a bitchy tsundere with standoffish personality. On the other hand, Stella and Ikki actually become friends. In other words, Julius is more tsun, while Stella is more dere. I feel like, as a main love interest and character, Stella has beaten Julius out. Not only are her reactions cute, but she's also a lot nicer, and we don't have to watch her as she abuses the main protagonist constantly over perceived "faults." Granted, she still has her moments, but those have more to do with embarrassment than, "I'll kill you, pervert!"

The Asterisk Wars: 1. Chivalry of a Failed Knight: 2

And finally, the last one, the character development in episode two. In the second episode of The Asterisk Wars, neither Ayato nor Julius receive much character development. We learn very little about their past. Just about the only thing we do learn is that Ayato apparently has tremendous power but isn't supposed to use it because, and once again, I quote, "He hasn't discovered what he's supposed to do." On the other hand, we learn that Ikki was ignored by his family because he didn't have the magic power or potential of everyone else, and that he tried to run away from home. We also learned that he almost died in a snowstorm, but he was rescued by his grandfather, who encouraged him to work hard. We also discover that Ikki is actually ranked F because his family didn't want him becoming a Knight, so they made the way to determine who got a good education based on their magical power, literally trying to force him out of the academy. Furthermore, in episode one we learn that Stella's reason for coming to the academy is because her country needs a strong Magical Knight, but because people placed her in the stereotype of a genius back home, she wasn't able to get stronger. Ikki and Stella feel much more compatible than Ayato and Julius who, like most tsundere/main lead couples, feels more like the animators are forcing the two together than a natural progression with their relationship.

The Asterisk Wars: 1. Chivalry of a Failed Knight: 3

In short, I feel like Chivalry of a Failed Knight is a much better anime, and although I'll watch both because harem/action anime are what I like the best, I have higher hopes for Chivalry than I do for Asterisk.

Posted by Unknown at 1:34 PM No comments: