I Couldn't Become a Hero, So I Reluctantly Decided to Get a Job 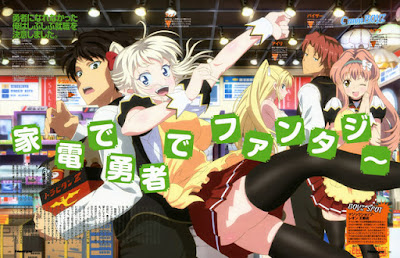 Is it just me, or do the Japanese love giving their anime over-the-top, overly long, ridiculous titles. I Couldn't Become a Hero, So I Reluctantly Decided to Get a Job is the story about a young man who went to an academy where people trained to defeat the Dark Lord. Unfortunately, the Dark Lord was defeated before he even graduated and the academy went under. Destitute and in need of money, Raul Chaser reluctantly gets a job working for a magic appliance retail store. Months later, another person also begins working there - the Dark Lord's only daughter, Fino Bloodstone. Can't you just smell the recipe for disaster here?

This is one of those anime that I feel are underrated. Sure, it's not the best. In fact, most of it is downright cliched. However, I think this anime understands that it's a cliche and doesn't pretend to be something else. The humor, while seen in every ecchi anime series, is well-done and over-the-top. The ecchi is, well, ecchi. There's not much that can be said there. This is an anime that has plenty of boobs for young men who want fan service to enjoy. While I'm sometimes sketchy about ecchi, this anime is of the ecchi genre, so pandering to fan service actually works here - unlike some of the other anime I have watched.

The animation is okay. Honestly, I've seen better, but I've seen worse as well. This is a middle-tier anime, where the animations aren't terrible, but not amazing to the point where you're thinking, "wow! The animation is so flawless, and the frame rate is amazing!" I will admit, though, that I do like the artwork. It's sort of standard, but it's still nice. The girls, in particular, are well designed. I suppose that's only natural, since this is an ecchi anime. No one's gonna want to watch an anime about boobs and nude scenes if the female's weren't hotter than sin.

Despite this being an ecchi anime where most of the plot is, um, well, PLOT, this does have a somewhat interesting story. It also makes you wonder. What happens to the people who tried to become a hero but, due to unforeseen circumstances, never got the chance? This story deals with a new, intriguing aspect to heroism and Dark Lord slaying that I haven't seen before. Raul Chaser is a man who dreamed of defeating the Dark Lord and becoming a hero, yet now he's stuck working at a retail store because none of the vaunted, Dark Lord slaying abilities he has are useful in anything but, well, Dark Lord slaying. Now he has to deal with the fact that he's essentially wasted several years of his life learning how to become a hero in a world where heroes aren't needed. To make matters more interesting, one of his co-workers happens to be the daughter of the Dark Lord that he wanted to kill, which adds a new dynamic to the story.

Aside from Raul Chaser, Fino Bloodstone, and Ahri All-A, none of the characters are really touched upon. This isn't as bad as it sounds. Like I said. This is an ecchi anime. Literally. It's genre is ecchi. In an anime where the story is merely an excuse to deliver boob scenes to the audience, character development isn't that important. I was honestly surprised that these three actually received the development they had. Raul and Ahri deal with what it means to live in a world where their skills are no longer needed, and Fino is dealing with the fact that she's a demon, the daughter of the Dark Lord, living in a world that she doesn't understand. While the plot never gets very deep or complex, sticking with mostly comedy and slapstick humor, the way these aspects are pulled off is well-done.