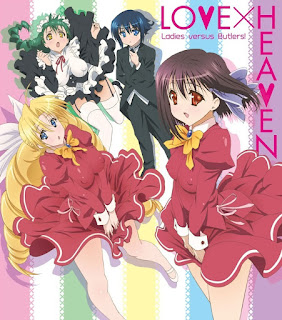 In a long line of dumb anime, Ladies versus Butlers stands at the top as one of the dumbest anime I have ever seen. It was so stupid that, while I watched it, I could slowly feel my brain cells spontaneously combusting from the stupid of it. That being said, I actually had a decent time watching this.

This anime is, quite frankly, plotless. There is literally no real story to this anime. Supposedly, it's about some guy who ends up attending an elite school to learn how to become a butler, but it's really just an excuse for fan service and tits. Yes, tits. I cannot tell you how many times girls would got naked in this anime - one girl even randomly strips for no reason. In public. Stripping in public for no reason! What the hell?! That being said, this anime also knows it's a stupid boob comedy and doesn't try to be anything else. I suppose there is some charm in the fact that, despite how dumb it is, it at least understands its own stupidity and plays up to it. Surprisingly, some of the boob jokes were quite funny, sort of like how fart jokes are funny, despite no one knowing why.

Characters in this anime are all pretty flat. They don't have a whole lot going for them. Each one is basically an archetype, and the main character is bland enough that I think he and Bella Swan would've made a smashing couple. Oddly enough, this anime's greatest strong point is the artwork, which is weird because the art is actually pretty plain. I think its because, in spite of the designs being basic, it's at least different. Of course, it could also have something to do with the boobs, of which there are a lot in this series. While I never bothered counting, I think each episode had, at least, five different scenes where a girl was showing off her chest. Most of the time, that nudity scene was there for no reason other than, well, because, I guess.

Overall, I would say this anime is... not really worth your time unless you're into 2-dimensional tits. No, I am not joking. While I thought some of this anime was funny, I understand that not everyone can enjoy pointless humor and titty jokes. There's also the fact that this anime has a very unfulfilling end. While I expected that, it's still disappointing to see.