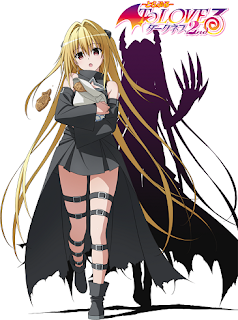 That being said, while some other people probably wouldn't enjoy this anime because, well, it's a lot like watching a really funny porno without sex, I like it. Yeah, I know. It's perverted, and the plot centers around its perversion. How could anyone like that, right? I guess I'm just a perv, then. The fact is, I think it's a really funny anime, and while I'm not the kind of guy who goes out and buys figurines and hug pillows and calls them my "waifu," I do enjoy admiring beautiful artwork - and the females in this anime are are gorgeously drawn. The improbable scenarios that somehow always end with Rito either groping someone or having his face shoved into their crotch are funny, too.

Now, despite how I enjoyed this anime, I'll admit that I don't think it was as good as the first season - or rather, I don't think the story is as enjoyable now as it was back when I first started watching. Truth is, I feel like the anime is going somewhat downhill. The reason is simple: Plot progression. While I understand that this anime's plot centers around it's ecchi, I do wish there was more progression with the story itself. Considering how much time is spent with Momo trying to enact her "Harem Plan," one would think that Rito would have either just given in by now, or grown a pair of balls and told her no. However, that isn't what's happened. In fact, nothing has changed between now and when the first season of Darkness aired. This lack of any real development bothers me.

Something else about this anime that I really did not like is the lack of Lala Satalin Deviluke. In the first series, Lala played a major role, which is natural, as Lala is supposed to be the main heroine. In To Love Ru Darkness, she takes a back seat and we only see her occasionally - usually when Rito falls into her boobs. I know most people prefer Momo over Lala, but I'm the opposite. As far as likable characters go, I feel like Lala is much more likable and fun than her younger sister. I know what you guys are thinking, "But Brandon! Momo is the one who came up with the Harem Plan!" I am aware of this, believe me. However! That is exactly why I like Lala more. Unlike Momo, who is trying to push her harem plan onto Rito, Lala simply wants what is best for Rito. I feel like her love for him is more pure than her sisters. I also enjoy Lala's bright personality and outlook on life. If Lala had one weakness, then I would have to say that it's being too nice. Lala is the kind of girl who seems to think everything will work out, and she doesn't seem to try to progress her relationship with Rito. I know this is contrary to what I said earlier, but I do wish she would at least make an attempt at becoming more intimate with Rito. Regardless, Lala is still my favorite female out of the whole bunch, and I wish she'd gotten more screen time.