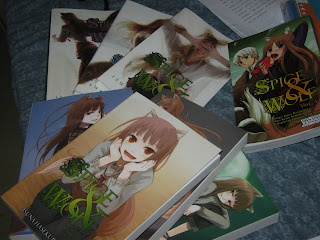 Before I begin this review, can I just say, "Oh, my god! Oh. My. God! OH MY GOD!" There, now that we've gotten this out of the way, I can tell you all that volume 5 of Spice and Wolf was unbelievable. Amazing. Incredible! At least until the end, where the author must have suffered a brain fart.

This volume was definitely the one with the most romantic tension between Lawrence and Holo. In the beginning, we get to see how truly close these two have become. Their banter is delightful, and Lawrence shows that he's beginning to grow used to being in the presence of the wisewolf. At the same time, we can see that Holo still has something of a leg up on him. However, tensions rise and Lawrence and Holo are soon faced with a problem that's been on their mind for a while now, but was never put into words, because doing so would mean confronting that issue.

Immortality. It's an unusual concept. We see this a lot in other stories, but here, it's meaning is clear. Holo is immortal, a goddess who lives within the wheat. Lawrence is a human. He has a finite lifespan. More than that, however, is the fact that Holo, as an immortal wisewolf, can only enjoy something for so long. Eventually, when you have had something for a certain period of time, it no longer becomes this new, amazing thing. That video game system you own? You'll probably discard it in a few years after it's become obsolete or you grow bored with it. That awesome new car you just bought? At some point, you'll begin to want a new one. In that same way that we humans eventually grow bored of the things we own, Holo realizes that she will eventually grow bored of Lawrence's companionship. Now she wants to end their journey before the time she spends with Lawrence becomes stale. Throughout the entire story, I was on the edge of my seat, wondering if these two would really split up.

While I loved how the tension in this story rose, the one thing that I did not like about this volume was it's ending. It felt so anticlimactic. With so much build up, tension, and drama, I was really expecting an exciting end. What I got instead was a lackluster end that made me go, "wait, is that it?"

Despite how the ending was less than I'd been hoping for, I can't say that I'm dissatisfied. I still enjoyed most of this volume, and the drama throughout the rest of the book makes up for the lack of a strong end.
Posted by Unknown at 1:36 PM No comments: