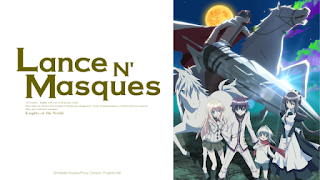 Because I review anime that I didn't like, along with anime that I did like, I am now reviewing Lances N Masques, which is an anime that I couldn't watch past episode 2. Please remember that everything I write here is my opinion. You are free to agree or disagree. If you enjoyed this anime, more power to you.

The first thing you need to know about Lances N Masques is that it's about a romantic entanglement between a 7-year-old girl and a teenage boy. Now, even though I'm not a big loli fan, I get the appeal that they have. As Sora from No Game No Life once said: "Cuteness is life. Cuteness is justice!" That being said, most lolis are, at the very least, the same age as the main character and simply have the appearance of a little girl. To me, this anime felt like straight up pedophilia. Maybe I'm misunderstanding things, maybe I'm taking the whole "hero rescues the princess" theme that this anime has going for it too literally. However, the fact that my first thought upon watching this anime was, "the main love interest is a child," tells me that, even if this anime isn't actually about some dude who wears a mask becoming romantically involved with a 7-year-old, it's far too close for me to feel comfortable watching it.

Following the creepy romance between a teenage boy and a 7-year-old girl, there's also the other caste to consider. No one in this anime has any depth to them. The girls are all flat, one-dimensional characters that could have been taken from any harem anime and tossed in here. The main character also has a very bad case of White Knight Syndrome, which I also call Feed the Harem Syndrome, since that's really all it is - an excuse for the main character to have a harem, or at least gather a bunch of women around him. None of the plot for this anime really stuck with me either; the humor fell flat, and the only character worth mentioning is the aforementioned little girl - and since I'm not into little girls, that wasn't a strong enough point for me to continue watching it. In short, this anime, in my opinion, was not worth watching.

Posted by Unknown at 2:24 PM No comments: