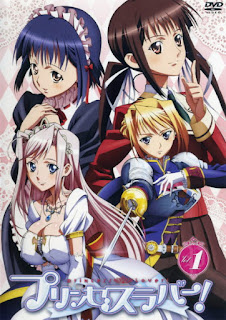 Princess Lover is a harem anime that tries to combine action and politics with standard harem dynamics and comedy. I say tries because it mostly fails. Sure, the art is decent enough, and every female is drawn to perfection, but this anime tried to be too many things at once.

Anyone who's ever watched a harem anime knows that to adequately portray a harem and not have the entire story fall apart, there are several prerequisites that you must have: A strong cast of femalecharacters who, for one reason or another, want to get into the main character's pants; a main protagonist who is bland enough that they can fit into this archetype without coming on too strong and ruining the story; and a plot that carefully balances each girls interaction with the main character so that no female comes out stronger than any other female. In that regard, for the first six episodes of this anime, it was successful. Despite how bland and uninspired the show was at first, I could easily watch it in the same guilty pleasure manner that some people might read erotica novels.

The problem comes after episode six, where the story tries to shift from a harem romantic comedy to a political/thriller... comedy. Yeah, I don't get it either. In either event, the problem with this sort of change halfway through the story is that by only having six episodes dedicated to "romantic comedy shenanigans between protagonist B and his harem," none of the females get developed enough for me to really care about them. I feel like that's kind of a shame, too, as I actually think all of these characters have potential. Charlotte comes across as a slightly naive but devious princess, Sylvia is a strong young woman with a righteous heart and is skilled with a sword, Seika is a successful business woman and fashion designer, and Yu is an extremely kind young woman who's served Teppei's grandfather since she was rescued from an orphanage.

I think if this anime had more episodes, or maybe had been given a second season, it could have been decent. It would never win any awards, and I probably wouldn't recommend it to anyone who doesn't love the harem genre, but it would have at least been okay. As it stands, without the cast of female characters getting the development they need to make people care about them, this anime kind of falls flat. It's even worse because after the story shifts gears from harem comedy to political thriller, it still has the same comedic tone as it did when it was a harem comedy. This means that all of the tension that should have been present during this shift is demolished by the pointless comedy. All in all, this was an anime that could have been okay, but lost its charm halfway through.