Freezing Manga up to chapter 196


This is a review of the manga from chapter 1 all the way up to it's current chapter of 196.

What is there to say about this manga? I honestly have mixed feelings on it. There are a lot of problems with this manga; continuity issues, plot holes, massive contradictions of previous important plot points in later chapters. Seriously, the number of plot issues that this story has is incredible. Despite only having 196 chapters, this manga has contradicts itself almost as much as Naruto did - and that manga had 700 chapters!

Despite that, I still really like this series. There are several reasons for this, but I'm only going to get into one of them right now. And that reason is badass female protagonists. 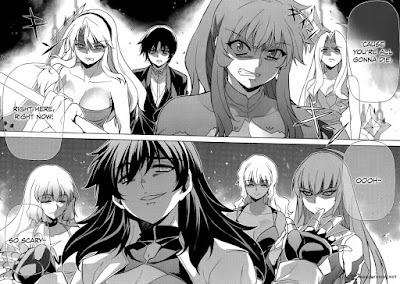 Think I'm joking? Yeah. No. This is no joke. Freezing is a manga where every single woman in it can kick a man's ass six ways to Sunday. Actually, if any of these women kicked a man's ass, said ass would be blown into bloody chunks. That's how incredible these women are.

Review will continue as more chapters are released.
Posted by Unknown at 5:58 PM No comments: