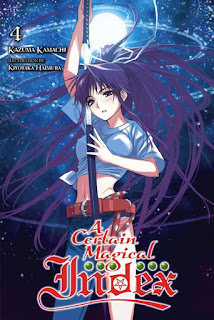 A Certain Magical Index volume 4 is probably the weakest of the four volumes that I’ve currently read. Despite that, I do not believe this is a bad story. Indeed, the combination of humor and suspense presented a strangely interesting contrast. I enjoyed reading this volume, even if I don’t think the writing itself was as crisp or the story as good as previous volumes.

Before I get into the bad stuff, why don’t I share what I liked about this volume? Volume 4 starts off with Touma Kamijou going on vacation with his family - only to discover that, one morning, everyone he knows has somehow switched bodies. His mom has turned into Index, his cousin has become Misaka, and Index has turned into his blue-haired friend from school. Everything is messed up. 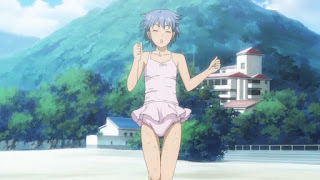 Angel Fall. That is the name given to the spell which has somehow swapped out people’s bodies, and it is the most unique type of spell I have read about. While the way this spell’s mechanics are described is confusing, I believe the theory behind its conception makes for an enjoyable plot point. It also does a lot for the comedy of this volume, of which there was plenty, such as when Index, her body swapped with the one Touma calls Blue Hair, is seen wearing her one-piece swimsuit while wearing the body of a man. It sounds confusing, but when you read it, it makes sense. The disturbing illustration of a male decked out in a frilly bathing suit also helps. 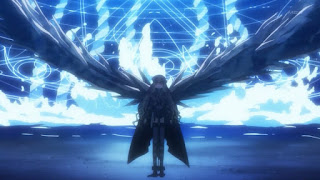 The story combines a blend of humor, suspense, and action to tell its story. I thought the humor was a nice touch, however, the switch from humor to suspense could be a little jarring occasionally. The shift from one tone to the other wasn’t always smooth. That being said, there were a number of plot twists that I didn’t expect while reading this. Despite having seen the anime, I still found myself surprised at certain points, which I enjoyed because it meant I couldn’t predict everything. On the other hand, certain parts of this story were more tedious to read than they were to watch. The fight scene at the end was a snore fest. I didn’t even care who won, not because I knew what would happen, but because I just didn’t feel anything about the fight. 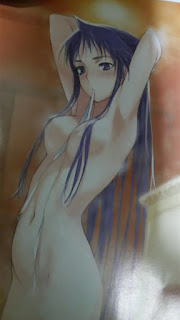 Another thing I would like to note is that Kiyotaka Haimura is as sloppy as ever. Some of his illustrations were impeccable, and others sucked. I’ve noticed in this volume that Kiyotaka seems to excel at drawing nude females. There are two illustrations in here, one color and the other gray scale, of a naked Kaori Kanzaki. It was really well done. Consequently, all the others vary from just okay to “I want to gouge my eyes with a rusty spork.” Oddly enough, the only other drawing aside from nude Kanzaki that I can say was any good is the one of Blue Hair wearing a frilly one-piece bathing suit meant for little girls. I’m not sure how to feel about that.


Despite the flaws found within this volume, I still enjoyed the story and am looking forward to reading volume 5.
Posted by Unknown at 3:39 PM No comments: