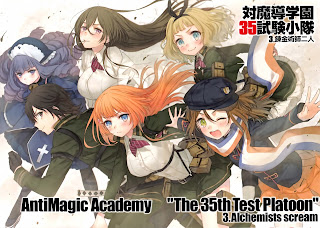 The first thing about this show is that this anime has some surprising depth. First off, the main character is quite a bit more assertive than the average harem hero, yet he still maintains enough harem protagonist tropes that he works well as a buffer for the girls in his harem - sorry, I meant, for the girls in his squad. The girls also have a bit more depth than the average harem female. Granted, each and every one of them has the cliche'd "dark past" trope, but considering the unforgivable world they live in, I can forgive that. While this anime is filled with what I would consider standard stereotypes, the characters have enough personality and backstory that I'm not as hard on this as I would be on other anime.

Like a lot of anime, this one mixes "dark" themes with humor and fanservice. While some anime fail at finding the proper balance between these three genres, Anti-Magic Academy does a decent enough job that I'm not put off when I see something funny or fanservice-y in an anime that also has people being violently killed. While there were no "laugh out loud" or "snort milk from your nose" moments, it was funny enough that I could appreciate the humor, and it was serious enough that I didn't grow bored with it. While I wouldn't rate this series very high on my list of "anime you need to watch," I do think this is series does well with the tropes it uses and presents an entertaining series for people who are into this genre.