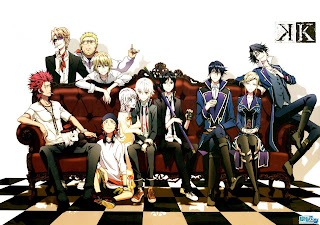 A part of me is beating myself up for not doing a review of K Missing Kings sooner. I loved the first season, K Project, and was super excited when we learned that there would be another season. However, I think the biggest reason that I wasn't as enamored with the idea of writing a review was because I didn't want to write anything bad, and, most unfortunately, I have mostly bad things to say about Missing Kings.

The first issue with the series is the distinct drop in animation quality. While still better than the vast majority of anime, anyone who's seen K Project will be able to tell that the animation in Missing Kings is nothing compared to the original. Where once there had been seamless animations that combined 2D and 3D artwork, now you can actually see the difference. Where before, the fight scenes showed flawlessly smooth animated transitions that allowed us to really see the flow of combat, now a good majority of the fights seem almost half-assed. The production quality of Missing Kings dropped considerably, and in an anime like this, where we expect beautifully made animations due to their previous history of excellence, seeing such a hefty decline is disappointing.

The second issue that I had are with its characters. K Project's first season focused heavily on developing the dynamic between its three main protagonists; Shiro, Neko, and Kuroh. While it still showed us enough of the other characters to give us a good sense of who they are, these three were the primary focus, which thereby made them the most likable and relatable characters of the season. Unfortunately, it looks like GoHands has decided to ignore all of the developing they did of these three in favor of introducing a whole new cast of characters and focusing on K Project's side characters. This was my biggest disappointment. I was expecting to see the awesome dynamic between these three come back into play, but they only had a few scenes in the entire season. Instead of the humorous and heartfelt moments with them, we were introduced to a whole slew of new characters that never got enough development for me to even care about them.

My last issue was shoving aside good character development for fanservice. Now, I like fanservice. I really do. There's a reason the harem genre is my guilty pleasure anime. However, I dislike it when an anime has fanservice for fanservice's sake, especially when it means that none of the characters are going to be properly developed because the director decided that making these boobs bounce and jiggle was more important. Season 1 had great fanservice. It wasn't absurd and it didn't detract from the story. The fanservice in season 2 is just obscene, and it does detract from the story. Sometimes I would be yanked out of a really serious and tense scene because said intense scene was suddenly derailed by a pair of boobs being shoved into my face, or because the blond chick suddenly leaned over and we're given a panty shot for no reason.

Now, despite my complaints, I did still enjoy season 2, but I didn't enjoy it nearly as much as season 1. I guess I raised my expectations to be too high. I was expecting an anime with the same or better quality than the first season, with an amazing plot and a return of my favorite trio. What I got was an okay anime with better than average animation and way too many side characters.