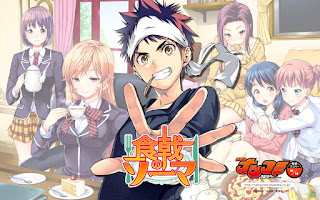 I am kicking myself in the butt for not reviewing this sooner. I blame it on this anime getting 24 episodes instead of the average 12. Yes, I am in no way responsible for being negligent. Ahem! That aside, the reason I'm so shocked is because Shokugeki no Soma is one of my favorite anime to have hit online streaming sites this season. It has everything that I like in anime - well, almost everything. It has enough things that I love that the other things don't matter.

This anime is ridiculous. It's over the top, epic, and just plain epically hilarious. You wouldn't think that an anime about cooking could be so damn intense - until you watch the first episode of Shokugeki no Soma. This is like taking Hell's Kitchen, mixing it with typical shonen antics, and cranking up the fan service to 9,000. Awesome doesn't begin to cover it. I had so much fun watching this anime, and it's surprisingly educational, too! I've actually tried making some of the dishes they have in this anime, which you can actually look up as the recipes are provided in the manga. Sure, my food doesn't turn out nearly as good looking, and no, I have yet to have anyone orgasm from tasting my food, but that doesn't mean I didn't have a blast. Another enjoyable aspect was how accurate the information found in this anime is, which makes sense, as Yuki Morisaki, a Japanese chef, provided all of the recipes for this series.

Look at this rice omelet. Do you see it? Can see you see the steam as it rises from the surface? You can practically smell the rice and spices mixed in with the omelet, can't you? Doesn't this make you hungry? All of the food in this anime looks gorgeous and tasty, but it isn't just the food. The anime itself is really impressive. The character designs are well thought out, and the animation is really quite pretty. I didn't notice many flubs during animation sequences, which is impressive considering this has a surprising amount of action despite no epic battles taking place - unless one wants to count war with food as epic battles.

One thing I'd like to bring up here is the fan service. It's prevalent in this anime. Very prevalent. While some people might be turned off by this, I thought it was hilarious. It gives the "Oh, my God! This food is so freaking good!" aspect of the show a whole new meaning. Watching people as they burst out, moaning about how good something is as their clothing randomly bursts into fabric particles never failed to crack me up. Just so you all know, if Hell's Kitchen had this sort of fan service in it, I'd have started watching it ages ago!

The fan service is also very gender equal. For anyone who's going to complain about this show being sexist because women get naked, I'll tell you right now, men also get naked. One of the ways this show avoids not only becoming a cliche, but also avoiding the typical problems that stem from fan service, is how both men and women seem to suffer from food-gasms every time they eat. By doing this, it lets you know that, no, the fan service isn't just here to give horny teenage boys something to fap to. There's a reason for it - the over the top humor that makes this series so funny. This is a series that gets its rocks off by presenting over the top, extremely exaggerated, fan service-y humor, and the way that service is presented is surprisingly original. There's no "accidental boob grabbing" here. I find that refreshing.