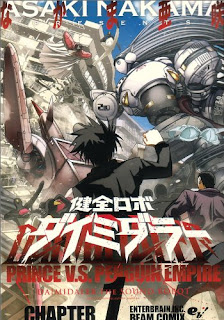 I'm going back a little bit. Daimadaler: Prince V.S. Penguin Empire is an anime that came out, I wanna say, last year. Before anything else is said, I feel the need to state something. This anime is undeniably, unequivocally, and unrepentant... stupid. It's dumb, it's crass, it's honestly pretty sexist, and I wouldn't recommend it to anyone who has strong sensibilities. That being said... it can also be pretty funny, and I won't deny that a lot of the sexual innuendo made me laugh.

Daimadaler is like Gundam... if Gundam was about a massive pervert who became more powerful after fondling a pair of sweater holders. And by sweater holders, I mean boobs. This dude is like Issei Hyoudo cranked up to 9,000. Think I'm joking? No, this isn't a joke. I'm 100% serious. Issei Hyoudo is a harmless pervert; too nice to actually do anything without a girl's consent, but lecherous enough to make people uncomfortable. This dude doesn't have Issei's niceness - and while his bad boy attitude is kind of a nice change of pace from traditional protags, I actually became really uncomfortable watching all of the scenes where he groped the female heroine. Like, really, really uncomfortable. This anime is, quite literally, the guilty pleasure of guilty pleasures. You're not going to watch this series for the story. The only people who are coming here are the ones who want to see this girl having her massive mammaries fondled.