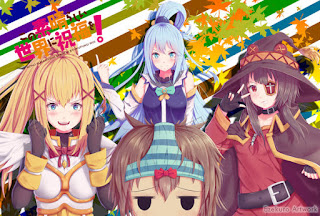 I'm here to speak with you today about the most hilarious anime that I've seen in a while. KONOSUBA is an anime that takes a traditional Dungeons and Dragons RPG fantasy setting and flips it on its head. Before I begin, I should state this point right now: KONOSUBA is 100% parody. It's entire purpose is to make fun of fantasy RPGs for shits and giggles. That's what makes it so damn funny.

So... let us start off with an introduction. Basically, KONOSUBA is about a guy named Kazuma, who is a hikkikomori NEET, or in other words, a useless shut in who never leaves his house and spends all his money on figurines and video games. During the one time where he leaves his house, he dies in the most humiliating way possible, and is given another chance at life in a new world with new opportunities...

... Well, he would have gotten another lease on life - if this wasn't a comedy. Since half of the story is him getting caught in stupid situations that are hilarious beyond belief, and the other half is him doing stupid stuff that's funny enough to make people piss themselves from laughing too hard, his new life is a tenuous and ephemeral thing.

Starting right off the bat, anyone who knows typical D&D will know how the mechanics here go. Characters in the world that Kazuma has been sent to are divided into classes. His companion, a goddess named Aqua, ends up becoming an arch priestess. He ends up with two other companions as well, both of which have arch in their titles as well. Kazuma, unfortunately, has really low stats, so he's at the bottom of the barrel. Not that it matters, since all of his companions are useless despite their power.

I think it's the characters specifically that make this series so funny. All of them are basically typical characters that you would expect to see in a fantasy setting turned on their heads. I like to think of them as mentally unstable at best and bat shit crazy at worst, and there's no denying that they're not necessarily the smartest bunch. The goddess is an egotistical idiot, the arch mage is a  chuunibyo with a love for explosions, and the arch knight is a traditional beauty with a masochistic streak so wide you can park several fuel tankers on it and still have extra space for that Death Star. Kazuma himself is also quite the character, though he mostly plays the straight man - when he's not doing stupid things himself. It is here where the story truly shines. 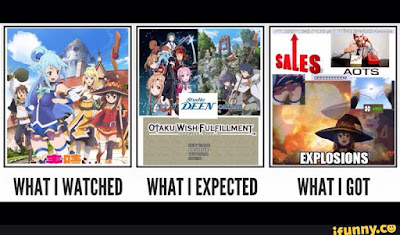 KONOSUBA doesn't have much of a story. I mean, technically, it's supposed to be about Kazuma getting sent to another world where he has to beat a Dark Lord, but we never even see the Dark Lord, so there. The story is essentially Kazuma and his harem of eccentric women getting into a lot of misadventures. I personally don't have a problem with this. Since this story IS a comedy, the comedy is what's supposed to make up the story. However, some people don't like it when anime don't have any linear progress. I figured I'd mention that for people who are looking for something with more plot development.

On the whole, I'd say this anime, in terms of pure dumb humor, was awesome. It has everything that I need in my mindlessly fun anime series. Though I was disappointed that it ended with only 10 episodes. Fortunately, a second season has been confirmed, which is nice because it means that other people have acknowledged this anime's awesomeness. I always like it when people understand the fun of watching something that's not meant to be taken seriously. I can only hope that seasons two us every bit as ridiculous as the first season. 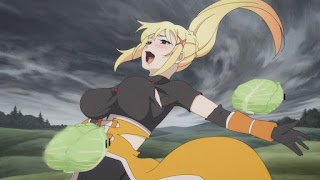