とある魔術の禁書目録 6 by Kazuma Kamachi
My rating: 5 of 5 stars

In keeping with the traditional storytelling of a Japanese light novel, volume 6 of A Certain Magical Index blends action, humor, and the high school setting in an entertaining tale that, while unoriginal, never ceases to be amusing.

I know that volume 6 has gotten some low ratings for whatever reason, but I actually think this was one of the better volumes of the series - especially compared to volume 5. The story starts off with Touma Kamijou attending his first day of the new year. Given that he doesn't remember anything about school aside from general knowledge, it's an awkward time for him. Still, like the main protagonist that he is, Kamijou pulls through. 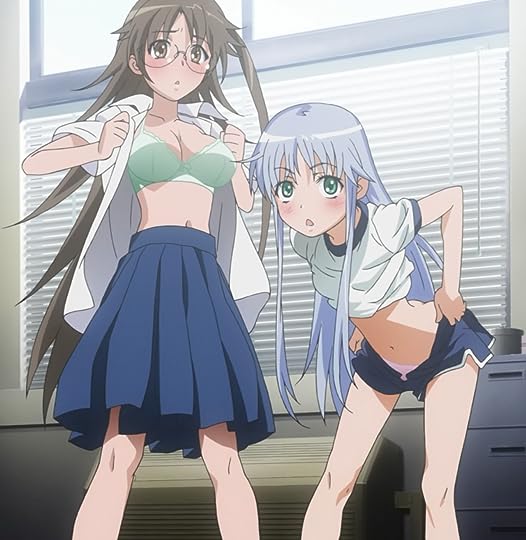 The book introduces us to a new character of the series: Hyouka Kazakiri. For those of you who are curious, yes, that image up above is how Touma and Kazakiri first meet. He walks in on her and Index changing. I know. It's weird. But hey, this is a Japanese light novel, which is like a western young adult novel, and for whatever reason, fan service is the word of the day in this sort of story. I just rolled with it and continued reading.

Fan service aside, I feel like this volume was a lot more cohesive, than the previous volume. From page one all the way to the end, everything in this story connects in a way that A Certain Magical Index hasn't before. Until now, it's mostly felt like a series of really unfortunate coincidences, but this volume makes me think that everything that has happened up to this point is somehow connect to a grand scheme.

The writing in this volume is pretty solid. Since it's translated, there are some mistakes, but I think the translations are getting better. There's not as many spaces between paragraphs, and it looks like the spaces now represent POV changes instead of just random spaces. Occasionally, an important one-liner will gets it's own little space. Something like:

But for the most part, it's gotten a lot better about formatting. As a whole, I think I liked this volume more than several of the other ones to have been translated thus far.

View all my reviews
Posted by Unknown at 8:16 AM No comments: