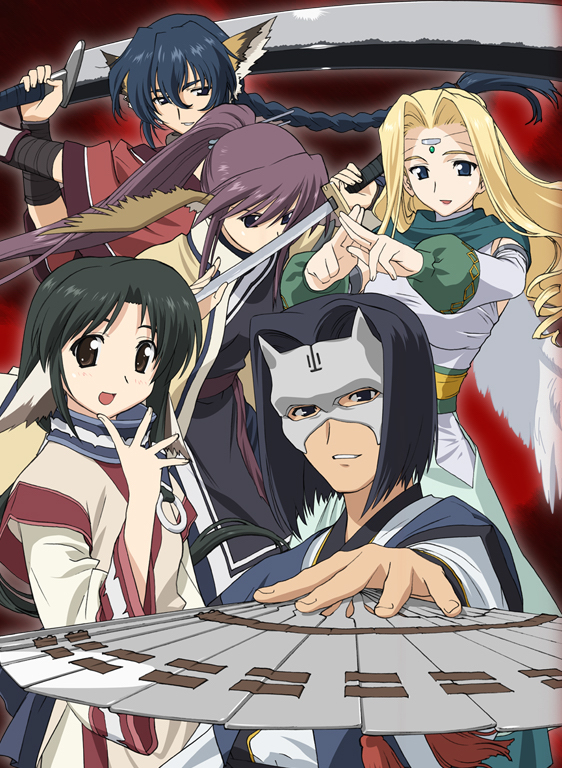 In a world where cute girls with animal ears reign supreme, comes a surprisingly violent series about a man who doesn't remember his past... and the cute animal-eared girl who loves him... yeah. Why don't I just get this review started, eh?

Let us begin with a basic rundown of Utawarerumono... nonononono. The series starts off with a man who has no past, no name, and was found unconscious in a forest. He also likes to stroke the tails of girls, but that's a story for another time. Given the name Hakuoro by the village chieftess, this anime follows his journey as he learns more about himself and gets into a lot of epic wars along the way. Yes. I am quite serious here. The amount of war packed into this 26 episode series is off the charts. However, that's not necessarily a bad thing.

As an anime that was based on a strategy game, it's no wonder that this series features a lot of epic fights. That said, the story isn't all fighting. There's a surprising amount of character development and thought put into their concept. One of the greatest joys I received from watching this anime was seeing how the characters interacted off the battlefield as well as on. Furthermore, all of the characters are truly likable. Whether we're talking about the adorable Aruruu, the hot-headed Oboro, or the lovely Eruruu, there are plenty of characters for you to gush over.

Character wise, if this anime had one true failing, it would be the blatantly obvious villains. I'm not joking here. Every villain who appeared was so obviously evil that it was sickening to see how obviously virtuous and just the good guys were. The first villain was a prick with a chip on his shoulder, the second was a fat emperor, the third was insane and started a war for pleasure... basically, there's no subtlety to any of these villains. It made watching the battles a little less enjoyable. I personally would have enjoyed watching a sophisticated sociopath who used trickery instead of brute force to get his way. Even the last bad guy was pretty blatant in his "I'm the evil final last boss!" spiel.

The final villain was another problem I had. This has more to do with foreshadowing, however. While a lot of the characters were explained well and developed, this guy was never explained until the info dump at the end. It would have been better if, rather than shoving lots of information on us during the final few moments, we learned about the villain bit by bit over the course of the story. As is, I almost feel like the director introduced this guy at random, didn't know what to do with him, and then said, "ah, screw it!" in the end and did whatever he felt like.

Overall, I think there are a lot of good things about this anime. There was a solid story, excellent characters, epic battles, decent animation and artwork, and an okay romance that I kinda wish had a little more substance. This was a highly enjoyable anime, and if you like any of the above mentioned things, then I suggest giving this a watch.

Posted by Unknown at 1:35 PM No comments: