Re:ZERO -Starting Life in Another World-, Vol. 1 by Tappei Nagatsuki
My rating: 4 of 5 stars

For those who'd prefer to watch instead of read:

I just finished reading volume 1 of the Re Zero – Starting Life in Another World light novel series, and I can I just say holy shit? While I was slightly disappointed with certain aspects of the light novel, it was overall one of the more satisfying reads.

For those of you who've watched the anime, you'll know the basics. Natsuki Subaru is a NEET, which stands for Not in Education, Employment or Training. One day while he's coming home from the grocery store, he gets sent to another world, one that looks like it came straight from the Dungeon Master's Guide. 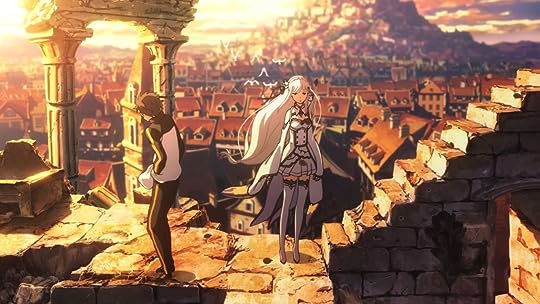 What I really love about the light novel is how, in the prologue of the series, we don't start off with highly detailed world building. Instead, we're introduced to our main character just as he dies. Yes, dies. He dies in the freaking prologue. How intense is that? I'm not one for violence, but the sheer audacity of having the main character die within the prologue is just awesome. My hats off to the author—at least it would be if I had a hat. 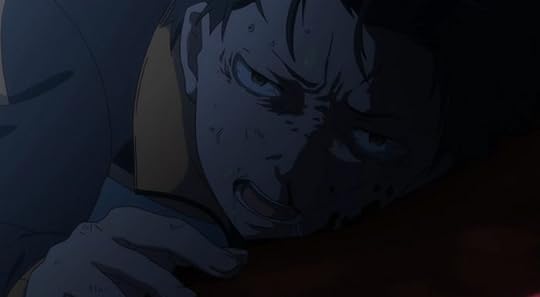 After the prologue, we follow our main protagonist as he struggles to deal with being sent to a fantasy world. Subaru is a pretty self-aware and genre-savvy character. He immediately figures out what's going on, that he's been transported to another world, and that he has some kickass super power that will come out at the appropriate time... (insert laughter here) Yeah, no. Subaru has no power, which I actually found kind of refreshing. It's clear from the onset that despite knowing he was sent to another world, Subaru is in way over his head. He's basically a regular teenager with no special traits and few good qualities. That said, despite how slow he can sometimes be, I was rather impressed with how developed he was as a character. His personality is very clear; he's somewhat abrasive and kind of rude, but he's genuinely a decent person who, upon being thrust into an unfamiliar world, is forced to face several hard truths. I think he did a pretty decent job, all things considered.

Going back to the concept of super powers, Subaru actually does have one power, but it only activates when he dies. Called Return by Death by Subaru, it basically acts as a form of reset. Whenever he dies, Subaru is sent back to a specific point in time. Now, I've heard so many theories about this: Subaru's stuck in a time loop, Subaru's not going back in time but creating a completely new dimension, blah, blah, blah. I've got some theories of my own, but until I have some solid evidence that one of them are correct, I'm not going into them. I don't want to embarrass myself. 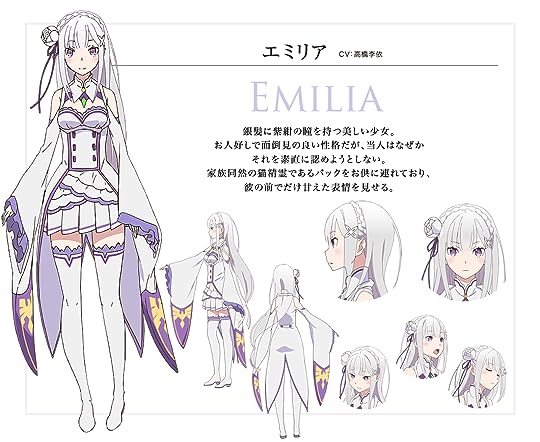 One of the other characters who we're introduced to is a half elf who calls herself Satella. Satella is a gorgeous girl who looks to be around Subaru's age with silver hair and purple eyes. Looking at the front cover and illustrations of her, I can agree with Subaru's assessment. Men would probably die for her smile. I really have to give props on her design. While she does look like a classical example of a heroine, she's probably one the prettiest heroines I've seen by now.

What I like the most about Satella has nothing to do with her beauty, however, but with her kindness. We learn from the onset that Satella is a very kind person; she helps people even when it means getting further away from her goal, she allows Subaru to help her despite the fact that he's actually dragging her down, and she has an earnest disposition that suits someone with the heroine status. Sort of like how Subaru fell in love with her at first sight, I found her character to be very endearing right from the beginning.

We're also introduced to Puck, a spirit who's been contracted to Satella. Puck's personality is playful and open, but also somewhat mysterious. I don't know much about Puck other than that. I guess it was done on purpose. The author doesn't want us knowing too much yet. 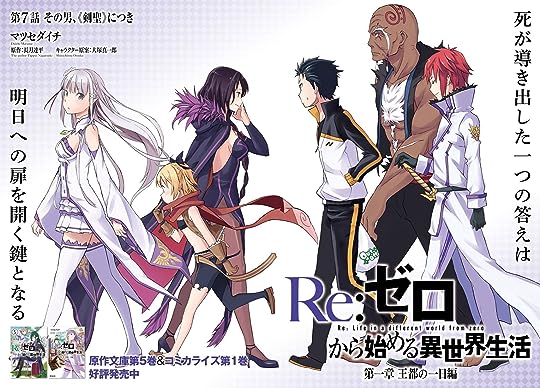 There are four other characters of interest that will become more important later in the story: Felt, who is a little blond girl that steals Satella's insignia, Old Man Rom, who owns the loot house, and Reinhard, a master swordsman who comes from a powerful master swordsman lineage. He's like the ultimate badass, and he's usually the kind of hero that stories are often told about. The last character of interest is Elsa, who goes by the name Bowel Hunter because, well, I guess she likes to open up people's stomachs and spill their insides all over the floor. She's kinda creepy, but I think that's what makes her such an interesting villain.

While reading this volume was a delight, the one thing I have an issue with is the English. Now, I know this was translated from Japanese, but with all the hype surrounding this series, one would think that Yen Press would do the best job they can to ensure that they have as few mistakes as possible. However, when reading this volume, I found several of mistakes. Grammar mistakes, syntax errors. The biggest issue was definitely the syntax. There were a number of times where I'd have to reread a sentence because it didn't sound right, and then I'd realize it was because a word got mixed up or the sentence didn't make sense due to how it was written. These parts would tear me right out of the story. 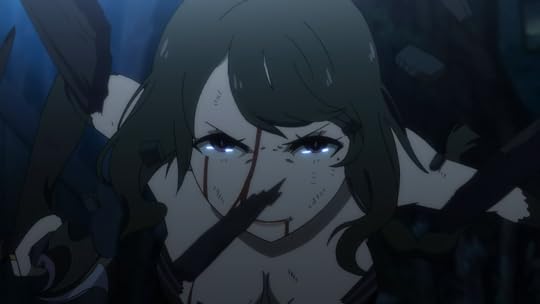 "As a popular male, it really is tough on me. I can never put the girls to sleep." ~ Puck, a mischievous cat spirit.

That said, I still had a lot of fun reading this light novel, which is why I'm giving it 4-stars. If the grammar had been a bit better, I would've given it a five, and even with the few mistakes, I'm still going to recommend this light novel to anyone who's looking for a story with an interesting plot twists that's been placed in a story that has a somewhat overused concept.

View all my reviews
Posted by Unknown at 1:05 PM No comments: