A Certain Magical Index, Vol. 7 by Kazuma Kamachi
My rating: 4 of 5 stars

All right! So, our story starts, not with Touma Kamijou and his unfortunate set of circumstances, but with Stiyl Magnus talking to Laura Stewart. Laura has a task for Stiyl. Apparently, there is someone among the Roman Orthodox Church who is able to decode the Book of the Law. Stiyl is being tasked with finding this person. 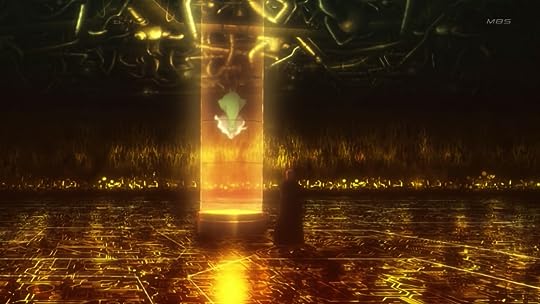 I've got another interesting fact, and this is a spoiler if you haven't already read the series. Alexander Edward also goes by the name of Crowley. Does it sound familiar? It should. If you've watched the anime or read the previous light novels, then you'll know that there is a character named Aleister Crowley. You'll know him as that dude who was floating upside down in a tank.

This is an interesting bit of foreshadowing. We already knew from the previous novels that Aleister was an important member of the science side. However, it looks like before he was stuck in a tube, he was an important figure in the world of magic. As to what this could mean for the series, well, that's anyone's guess.

And now that we know the back story, I bet you're all wondering where Touma Kamijou fits into all this. Well, you see, our hapless main protagonist basically ends up being dragged into this because Stiyl decided to kidnap Index in order to make Touma cooperate with him. Of course, had Stiyl could have just asked Touma and he'd have gladly helped, because that's what main protagonists do, but I guess asking for help was just too hard.

So, the mission is to save a woman named Orsola Aquinas. Strangely enough, Touma has already found Orsola, and he even brought the woman to Stiyl. Sadly, Orsola gets kidnapped by the group who is after her. Known as the Amakusa, the group who kidnaps Orsola is a small group of Japanese crossists. Supposedly, they've kidnapped Orsola because they want her to decode the Book of the Law. 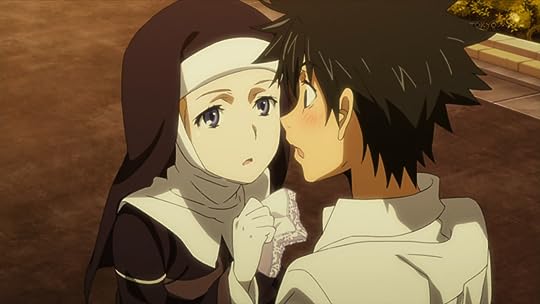 Also, while it's not that important to the overall story right now, the Amakusa was actually once lead by Kaori Kanzaki, who, if you've read the previous books or watched the anime, you'll know is another member of Necessarious and a saint of nearly godlike power.

In order to rescue Orsola, Touma, Stiyl, and Index team up with a group from the Roman Orthodox Church. A lot of strange shenanigans happen before the rescue takes place, including naked loli fanservice.

If there's one thing about this series that I don't like, it's the awkward fanservice. I just... don't understand the appeal of lolis. It's worse in A Certain Magical Index because Index is only 14 years old, and Agnes Sanctus, the leader in charge of saving Orsola, is only, like, 12 or something.

A rescue mission is concocted thanks to Index's knowledge of the Amakusa's magic. Here's a little bit of magical knowledge for you. The Amakusa have an ability known as Miniature Copy Pilgrimage. This is a form of teleportation magic used exclusively by the Amakusa.

The miniature copy is actually a reference to the Great Japanese Coastal Map, which is an atlas filled with all the survey work made by the cartographer, Tadataka Ino. Now, in this atlas, Ino plotted 47 portals.

Now, according to Idol Theory—which has nothing to do with Japanese idols by the way—when an object is created in imitation of another object, the two objects will influence each other. This theory postulates that duplicates retain the properties, attributes, and power of the original object. The greatest example I can think of right now is the Shroud of Martin.

Let's say that someone creates a duplicate of the shroud. According to Idol Theory, that duplicate will hold the same magical properties as the real shroud. However, because it's just a duplicate, the powers and affects are lessened.

You're probably wonder how all this mumbo jumbo relates to the Amakusa. When Ino created the Geat Japanese Coastal Map, he created the 47 portals. These portals were not originally there. However, Ino plotted them on his map, and this made the 47 portals realize themselves unto Japan. It's a form of reversal, essentially taking the Idol Theory and flipping it around.

It's because of these portals that the group is able to find and rescue Orsola. Sadly, we don't learn until after Orsola has already been taken into the custody of the Roman Orthadox Church that the Amakusa are actually the good guys. It turns out the Book of the Law was never in Japan. That was an excuse used by the Roman Orthadox Church to persecute Orsola for being able to decode the Book of the Law. 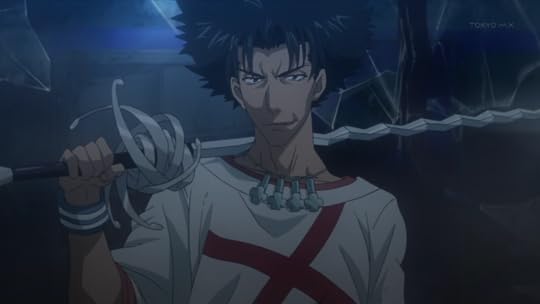 Outside of the creepy 12 year old nudity, the story wasn't bad. I enjoyed the action. I enjoyed the conflict. I do feel like the story contained a lot of redundant banter, and there was some trouble with the writing containing too much tell and not enough show. That said, there were enough surprising twists, interesting fight scenes, and emotional moments that I can forgive the few problems this volume had. If you're a fan of light novels in general, or even if you're just a fan of the anime, I'd highly recommend getting this volume.

So, that is my review of A Certain Magical Index Volume 7. If you enjoyed this review, please don't forget to give this a thumbs up. Also, be sure to let me know how I'm doing.

View all my reviews
Posted by Unknown at 6:50 PM No comments: